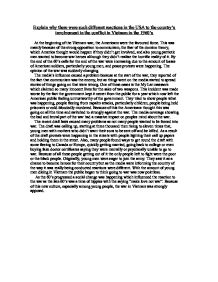 Explain why there were such different reactions in the USA to the country's involvement in the conflict in Vietnam in the 1960's At the beginning of the Vietnam war, the Americans were the favoured force. This was mainly because of the strong opposition to communism, the fear of the domino theory, which America thought would happen if they didn't get involved, and also young patriotic men wanted to become war heroes although they didn't realise the horrific reality of it. By the end of the 60's calls for the end of the war were increasing due to the amount of losses of American soldiers, particularly young men, and peace protests were happening. ...read more.

This incident was made worse by the fact the government kept it secret from the public for a year which now left the American public feeling untrustworthy of the government. They tried to show people what was happening, people fleeing from napalm attacks, particularly children, people being held prisoners or cold-bloodedly murdered. Because of this the Americans thought this was going on all the time and switched to strongly against the war. The media coverage showing the bad and brutal part of the war had a massive impact on peoples mind about the war. The recent draft laws caused many problems as not many people wanted to be forced into war. ...read more.

Because of all these people getting out of it the only people left to fight were the poor or the black people. Originally, young men were eager to join the army. They saw it as a chance to become heroes for their country but as the media were informing the country of the way it was really being conducted reactions were different. With the amount of young men dieing in Vietnam the public began to think going to war was now pointless. As the 60's progressed a social change was happening which influenced the reaction to the war as the late 60's was a time of hippies with the saying "make love not war". Because of this new culture, especially among young people, the war in Vietnam was strongly apposed. ?? ?? ?? ?? ...read more.