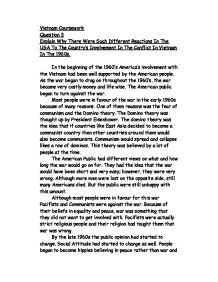 Explain Why There Were Such Different Reactions In The USA To The Country's Involvement In The Conflict In Vietnam In The 1960s.

Vietnam Coursework Question 3 Explain Why There Were Such Different Reactions In The USA To The Country's Involvement In The Conflict In Vietnam In The 1960s. In the beginning of the 1960's America's involvement with the Vietnam had been well supported by the American people. As the war began to drag on throughout the 1960's, the war became very costly money and life wise. The American public began to turn against the war. Most people were in favour of the war in the early 1960s because of many reasons. One of them reasons was the fear of communism and the Domino theory. The Domino theory was thought up by President Eisenhower. The domino theory was the idea that if countries like East Asia decided to become a communist country then other countries around them would also become communists. Communism would spread and collapse likes a row of dominos. This theory was believed by a lot of people at the time. The American Public had different views on what and how long the war would go on for. They had the idea that the war would have been short and very easy; however, they were very wrong. ...read more.

Nobody wanted to loose more people and so they became opposed to the war. The American Public were also shocked by all the Media. The Tet Offensive in 1968 was basically when 70 000 Vietcong attacked South Vietnamese towns during the Tet holiday or New Year. Many soldiers were on holiday and so their forces were down. The news media of the Tet Offensive had cause a dramatic effect. The film of the Vietcong guerrillas fighting in the Americans grounds had been especially shocking for the American Public. The impact of the Tet had been a large reason. A journalist had actually filmed a tied up Vietcong suspect being led by a group of ARVN troops, as this was being filmed, the chief of the Saigon Police casually walked up to the suspect and just shot him in the head. The suspect fell to the ground with large amounts of blood gashing out of his head. So to the American public, television viewers, the incident was shocking. A man had been displayed on public television were he had been killed on the spot with no trial and no defence. Another reason was My Lai in 1968 although the story did not break until later. ...read more.

He began to try and change the way America was run. Many people began to protest which began to cause a lot of question of why the black people were good enough to fight in the war but not good enough to do things like sit on the front of buses. The black people protested and rioted and decided that if something did not change they would no longer support the war. After this point of time protest carried on happening and got worse. In 1970 President Nixon troops had been released into Neutral Cambodia to destroy only the VC forces there. But people thought that another war would break out, just as Vietnam had. Protests began to take place but mainly at universities. In one protest that took place in May where four students were shot by a National Guard at Kent State University in Ohio. These killings sparked off four hundred other protests Many things changed the minds of the American public for whether the involvement in the war should carry on. The war had caused serious rising costs which had no end and the War itself seemed to have no end. Many things such as media and casualties as well as America and there social problems led to the public with drawing their support. Their involvement had finally ended in 1973. ...read more.