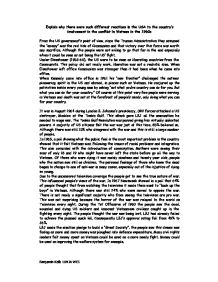 Explain why there were such different reactions in the USA to the country's involvement in the conflict in Vietnam in the 1960s From the US government's point of view, since the Truman Administration they assumed the "enemy" was the red tide of Communism and that victory over this force was worth any sacrifice. Although the people were not willing to go that far in the end especially when it could be seen as not being the US' fight. Under Eisenhower (1953-60), the US were to be seen as liberating countries from the Communists. This policy did not really work, liberation was not a realistic idea. When Eisenhower left office Communism was stronger than it had been when he came into office. When Kennedy came into office in 1961 his "new frontier" challenged the nations pioneering spirit in the US and abroad, in places such as Vietnam. He conjured up the patriotism inside every young man by asking "not what you're country can do for you. ...read more.

In 1967 Newsweek showed in a poll that 64% of people thought that from watching the television it made them want to "back up the boys" in Vietnam. Although there was still 24% who were moved to oppose the war. There is not really a significant majority who from seeing the television are pro war. This was not surprising because the horror of the war was relayed to the world on Television every night. During the Tet Offensive of 1960 the people saw the dead, wounded and dying US soldiers and innocent Vietnamese civilians caught up in the fighting every night. The people thought the war was being lost. LBJ had already failed to achieve the planned quick kill. Consequently LBJ's approval rating fell from 48% to 36%. LBJ made the election pledge to build a "Great Society", the people saw this dream was fading as more and more money was ploughed into defence expenditure. ...read more.

Hence opposition increased. So in March LBJ announced his decision to not for re-election. In 1968 it was also the turn of the young people. Students all over Europe and the US protested against the war. One of the most influential was a demonstration at Kent State University, Ohio. Four students were killed by guardsmen whilst demonstrating against the invasion of Cambodia. The reaction to this was greater than that to all the thousands of soldiers who died. This shocked the nation and it was clear that the mood to the war had changed. There are always differing views to conflict and this was most definitely the case in Vietnam. As the war progressed the mood of the majority changed. Even when 85% thought the war was just we have to remember there was still 15% who disagreed and as the war dragged on, death tolls mounted, more money was flooded in and protests increased so did this number. For some people the war was more personal than others but for those whom it was not were generally pro war. Benjamin Kolb 11MJA WCS ...read more.