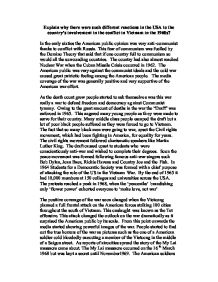 Explain why there were such different reactions in the USA to the country's involvement in the conflict in Vietnamin the 1960s?

Explain why there were such different reactions in the USA to the country's involvement in the conflict in Vietnam in the 1960s? In the early sixties the American public opinion was very anti-communist thanks to conflict with Russia. This fear of communism was fuelled by the Domino Theory that said that if one country fell to communism so would all the surrounding countries. The country had also almost reached Nuclear War when the Cuban Missile Crisis occurred in 1962. The American public was very against the communist ideals and the cold war caused great patriotic feeling among the American people. The media coverage of the war was generally positive and very supportive of the American war effort. As the death count grew people started to ask themselves was this war really a war to defend freedom and democracy against Communist tyranny. ...read more.

The protests reached a peak in 1968, when the 'peaceniks' brandishing only 'flower power' exhorted everyone to 'make love, not war' The positive coverage of the war soon changed when the Vietcong planned a full frontal attack on the American forces striking 100 cities throughout the south of Vietnam. This onslaught was known as the Tet offensive. This attack changed the outlook on the war dramatically as it surprised the American public by its scale. From this point onwards the media started showing powerful images of the war. People started to find out the true horrors of the war as pictures such as the one of a American soldier cold bloodedly executing a member of the Vietcong in the middle of a Saigon street. As reports of atrocities spread the story of the My Lai massacre came about. The My Lai massacre occurred on the 16th March 1968 but was kept a secret until November1969. ...read more.

When the draft was introduced this caused huge upset among the youth forming the peace movement. When the black population were drafted to Vietnam, this caused upset among the civil rights movement. By the late sixties the majority of the American population was against the war but this was not all. There where still a minority of patriots who where resolutely behind the war. The Vietnam War was a part of history the public of the USA wanted to forget. From 1969 and with the election of a new president the American government became committed to ending the war. In 1971 a veteran's march in Washington was held where the soldiers ceremoniously disposed of their medals. The sixties was a time of change where the youth and the black population started to have there own say on politics and things that would have before been seen as being something that they weren't to be involved with. This change in the social structure formed the anti-war movement that ended the Vietnam War. ...read more.