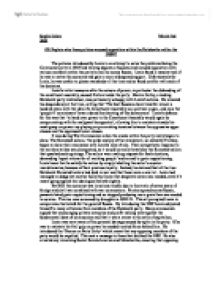 Explain why these policies aroused opposition within the Bolsheviks within the USSR?

Sophie Lakes March 2nd 2005 (B) Explain why these policies aroused opposition within the Bolsheviks within the USSR? The policies introduced by Lenin in an attempt to solve the problems facing the Communist party in 1918 had varying degrees of success and aroused opposition with various members within the party as well as across Russia. Lenin faced a massive task if he was to revive the economy and gain a more widespread support. Unfortunately for Lenin, he was unable to please everybody all the time and so faced conflict with each of his decisions. Lenin's initial measures after the seizure of power, in particular the disbanding of the constituent assembly, caused friction inside the party. ...read more.

The Kronstadt sailors, 'the pride and joy of the revolution', so called by Trotsky, began to show their annoyance with Lenin's way of rule. Their sympathetic response to the workers strikes was unexpected, as it would normally have been the Kronstadt sailors that quashed such uprisings. The sailors were making requests for fresh elections, demanding 'equal rations for all working people' and an end to grain requisitioning. Lenin knew that he satisfy the nation by simply labelling the sailor's counter-revolutionaries, because of their previous loyalty. Instead, he claimed that all the true Bolshevik Kronstadt sailors had died in war and that these were a new lot. ...read more.

Lenin was now aware of the potential damage caused by splits in the party. If he was to maintain his frail grip on power he needed a united force behind him. He introduced the 'Decree on Party Unity' which meant that any opposing members of the party would be expelled. This sent a message to those that disliked the NEP. He also arrested any remaining Social Revolutionaries and Mensheviks, ensuring that opposing parties also knew that he was a force to be reckoned with. Many hard-line Bolsheviks felt that the 'New Economic Policy', and the 'Nepmen' it created, meant that all they had fought so hard against was returning. Lenin did not agree, 'We are now retreating, going back as it were, but we are doing so as to retreat first and then run and leap vigorously'. ?? ?? ?? ?? ...read more.