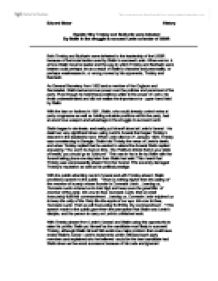 Explain Why Trotsky and Bukharin were defeated

Explain Why Trotsky and Bukharin were defeated By Stalin in the struggle to succeed Lenin as leader of USSR Both Trotsky and Bukharin were defeated to the leadership of the USSR because of the brutal tactics used by Stalin to succeed Lenin. When we look at how Stalin became leader and the way in which Trotsky and Bukharin were beaten could perhaps be as a result of Stalin's character and personality, or perhaps weaknesses in, or wrong moves by his opponents, Trotsky and Bukharin. As General Secretary from 1922 and a member of the Orgburo and Secretariat, Stalin had enormous power over the policies and personnel of the party. Even though he held these positions whilst in the power of Lenin, his rivals underestimated and did not realise the importance or upper hand held by Stalin. With the ban on factions in 1921, Stalin, who could already control votes at party congresses as well as holding valuable positions within the party, had an enormous weapon and advantage in the struggle to succeed Lenin. Stalin began to dominate, and really put himself about at Lenin's funeral. He dealt two very significant blows using Lenin's funeral that began Trotsky's descent in the leadership race. When Lenin died on 21 January 1924, Trotsky was convalescing in Georgia. ...read more.

Reasons to this could be because: It was not very flattering towards the two, and they didn't want it to come to the attention of the congress if they were to become leaders. The views of Trotsky were heard when The Thirteenth Congress in 1924 saw hostilities between Stalin and Trotsky out in the open. At this time Stalin was in effective leadership with Zinoviev and Kamenev. Trotsky was slowly being defeated with Stalin on the rise. Despite Trotsky's efforts he was defeated because the congress was filled with "well instructed Stalinist delegates" along with supporters of Zinoviev and Kamenev. Because of the ban on factions within the party, Trotsky was unable to rally supporters inside and outside of the party, and was also unwilling to cause splits in the party. Now looking like he was resigned to not gaining leadership of the party it was made worse when Zinoviev and Kamenev launched a campaign against Trotsky. They questioned his loyalty within the party and his opposition to Lenin in 1917. Trotsky retaliated and this argument inside the left wing of the party allowed Stalin to build his upon his power base once more making it look even more inevitable that he would defeat Trotsky, who he considered his main contender for the leadership. ...read more.

This effectively ended Bukharin stance as a possible leader of the USSR and any resistance to Stalin's position was non effective. Because of this Bukharin and other right wing leaders, Rykov and Tomsky, were removed from the Politburo and other party bodies. In conclusion to how Stalin emerged as sole leader of the USSR and why he defeated Trotsky and Bukharin to the leadership, came down to Stalin's actions, and his willingness to act upon weaknesses and opportunities presented to him to develop and progress his power within the party. Trotsky was defeated because of a combination of weaknesses and errors of judgements on his part, this allowed Stalin to exploit this, and effectively Trotsky helped remove himself from power. With Bukharin it was more to do with what had happened in the left side of the party, and the way he was allowed to employ his own supporters in key positions within the party by Zinoviev and Kamenev, which meant that when Stalin opposed and attacked the right wing of the party he was always going to get outvoted, so it was imminent that Stalin could defeat Bukharin after the left wing had been obliterated. ?? ?? ?? ?? Edward Slater History ...read more.