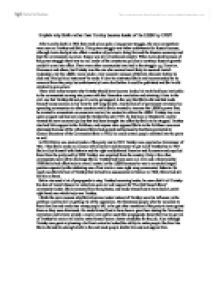 Explain why Stalin rather than Trotsky became leader of the USSR by 1928? After Lenin's death in 1924 there took place quite a long power struggle, the main competitors were seen as Trotsky and Stalin. This power struggle was rather unfortunate for Russia because, although Lenin had put into effect a number of policies to bring forward the Russian economy and kept the communists in power, Russia was still a backward country. When Lenin died because of the power struggle there was no real leader of the country so policies to continue Russia's growth couldn't come into effect. There were other communists involved in the struggle e.g. Zinoviev, Karmenev and others, but Trotsky was the one who seemed most likely to succeed Lenin's leadership over the USSR. ...read more.

Trotsky also was quite arrogant and had not joined the Bolsheviks until 1917, he had been a Menshevik, and he wanted the new economic policy that had been brought into effect by Stalin to be stopped. Trotsky also had little support in the Politburo, and anyone who opposed Stalin in the Politburo was soon dismissed because of the influence Stalin had gained and because he had been promoted to General Secretary of the Communist State in 1922, he could control people admitted into the party as well. In 1924 Stalin was elected leader of the party and in 1925 Trotsky was expelled as Commissar of War. Then Stalin made an alliance with Zinoviev and Kamenev to get rid of Trotsky but in 1927 Stalin allied himself with Bukarin and the right and defeated Zinoviev and Kamenev and expelled them from the party and by 1929 Trotsky was expelled from the country. ...read more.

I think the main reasons why Stalin became leader instead of Trotsky were his influence in the politburo and his skill at getting rid of the opposition. He threatened people what he would do to there families and made sure many people left, or he got other members of the party to turn against them so they were dismissed. He made himself out to have been a great hero during the November revolution and to have played a crucial role and he used fake propaganda about that time to get rid of Trotsky his main rival and to make himself seem a better candidate for the job. Also although Trotsky was great at planning a brilliant orator he lacked the ability to make people like him like Stalin did and his strong beliefs in the end made people dislike him and not support him. ...read more.