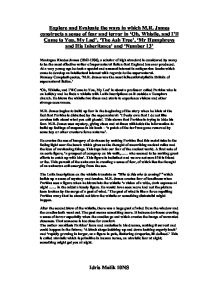 Explore and Evaluate the ways in which M.R. James constructs a sense of fear and terror in 'Oh, Whistle, and I'll Come to You, My Lad', 'The Ash Tree', 'Mr Humphreys and His Inheritance' and 'Number 13'

Explore and Evaluate the ways in which M.R. James constructs a sense of fear and terror in 'Oh, Whistle, and I'll Come to You, My Lad', 'The Ash Tree', 'Mr Humphreys and His Inheritance' and 'Number 13' Montague Rhodes James (1862-1936), a scholar of high standard is considered by many to be the most effective writer of supernatural fiction that England has ever produced. At a very young age he took a special and unusual interest in antiquarian books which came to develop an intellectual interest with regards to the supernatural. Ramsey Campbell quotes, 'M.R. James was the most influential stylist in Britain of supernatural fiction.' 'Oh, Whistle, and I'll Come to You, My Lad' is about a professor called Parkins who is on holiday and he finds a whistle with Latin inscriptions on it outside a Templars church. He blows the whistle two times and starts to experience visions and other strange occurances. M.R. James begins to build up fear in the beginning of the story when he hints at the fact that Parkins is disturbed by the supernatural: 'I freely own that I do not like careless talk about what you call ghosts'. ...read more.

desiring gold). The strange globe at the centre of the maze has now changed with inscriptions of 'prince of darkness' and 'shadow of death.' Latin etchings can be quite frightening because of their connection with religion and the medieval world. This is the idea of perception that M.R. James includes, telling us that we see the world differently and how Mr Cooper and Humphreys differentiate temperatures when they touch the globe. The trees and their surroundings create a shadow by the reflected moonlight. There is a vague suggestion that the woods are seducing Mr Humphreys like the belief in the god Pan. The god Pan seduced people into the woods like Selene, the moon goddess. M.R. James describes the weather to represent the emotions of the characters and people's feelings however in this case how Humphreys is feeling; a dark ominous sign and a symbol of danger. This is called 'pathetic fallacy'. He describes a 'small Irish yew, thin and black....' The maze is using dark, featureless objects to defend itself, and it is getting closer to the house. "My secret is for me and the sons of house" (It seems that the maze is opening for Humphreys but not for the others like Lady Wardrop because he's a relative of the uncle.) ...read more.

The use of very descriptive adjectives do much to emphasize and illustrate the setting that Anderson finds himself in the 'quiet' is described as 'deadly'. Anderson's fears about number 13 come out when the door eventually opened, through which an arm emerged which clawed at Jensen's shoulder. Jensen's 'disgust a fright' is a contrasted with the low laugh of whatever demonic powers reside within number 13. The characters are desperate for a refuge from what is described as the 'devil's den' which relates to anti-Christianity. The discovery of the document in the conclusion is an attempt to explain the inexplicable. Quite naturally deeply disturbed by the events in the hotel, Anderson and Jensen believed to have found the answers within the phenomena. To there dismay however, they are unfamiliar with the language whether it is upside down or written in two different languages. There is a degree of tension therefore, the reader is left uncertain and without explanation concerning the events at the hotel. M.R. James constructs a sense of fear and terror by using themes of loneliness and isolation. In his childhood, he liked to be alone, reading old books and he relates this to how he isolates Mr Humphreys and Parkins. Other themes are intrusion, revenge and justice, witchcraft, perception, the 'Uncanny', superstition and trying to explain the inexplicable. ?? ?? ?? ?? Idris Malik 10NS ...read more.