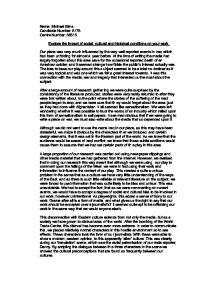 Explore the impact of social, cultural and historical conditions on your work

Name: Michael Sims Candidate Number: 8178 Centre Number: 56515 Explore the impact of social, cultural and historical conditions on your work Our piece was very much influenced by the very well reported events in Iraq which had been unfolding for almost a year before. At the time of writing the media had largely forgotten about this area save for the occasional reported death of an American soldier, and it seemed strange how fickle the public's interest actually was. The idea to base our play around this subject seemed to be a total no-brainer as it was very topical and was one which we felt a great interest towards. It was this connection with the media, war and tragedy that interested us the most about the subject. After a large amount of research gathering we were quite surprised by the consistency of the literature produced; stories were very rarely returned to after they were first written about, to the point where the stories of the suffering of the Iraqi people began to stop, and we were sure that they would forget about the area, just as they had done with Afghanistan. ...read more.

This created a quite a unique problem in the sense that as a culture we have very little understanding of the ways of the East, and as there is such little reliable or relevant literature on the subject, we were forced to use information that was quite likely to be bias and untrue. This was unavoidable. We had to accept the fact, that as we were commenting on current events, we would have to accept a degree of social and cultural bias to be involved in our work, however unintentional. As playwrights, this added a sense of irony to our work. Drama after all is a form of media, and what gives us the right to say that our work should be accepted over a journalist's? It seemed quite apt to be criticising our work in the same way that we would anyone else's. This disconnection with Eastern culture extends from not only the media, but as a society we have grown to distrust area of the world. ...read more.

As our play proceeded we began using less and less obvious examples of warfare, and this was used so to represent the idea of how difficult it is to classify 'war'. When we first began discussing the theme of war, we instantly thought of our classic trench situation, and so we wanted to use a number scenes set in this era so to mirror the much more modern events of other scenes. For example, in our advertisement scene we showed a full hearted and proud view of the British armed forces, protecting King and country from the threat of 'darkies'. This was took a comical look at attitudes to new technology, and as the characters had lines which were talking about the changing face of war, we were making references to the suicide bomber's conviction, that he was in fact the new face of war. Similarly, we also depicted the brutal murder of a man within his home. Although this scene would not have obviously been connected with war if placed by itself, in the context of scenes around it we were able to show the audience its relevance to the play. ...read more.