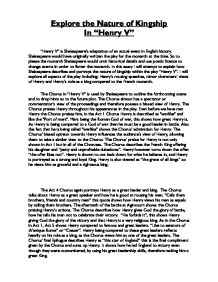 Explore the Nature of Kingship In "Henry V" "Henry V" is Shakespeare's adaptation of an actual event in English history. Shakespeare would have originally written the play for the monarch at the time. So to please the monarch Shakespeare would omit historical details and use poetic licence to change events in order to flatter the monarch. In this essay I will attempt to explain how Shakespeare describes and portrays the nature of kingship within the play "Henry V". I will explore all aspects of the play including: Henry's rousing speeches, minor characters' views of Henry and Henry's role as a king compared to the French monarch. The Chorus in "Henry V" is used by Shakespeare to outline the forthcoming scene and to drop hints as to the future plot. The Chorus almost has a spectator or commentator's view of the proceedings and therefore possess a biased view of Henry. The Chorus praises Henry throughout his appearances in the play. Even before we have met Henry the Chorus praises him, in the Act 1 Chorus Henry is described as "warlike" and like the "Port of mars". Mars being the Roman God of war, this shows how great Henry is. As Henry is being compared to a God of war then he must be a good leader in battle. Also the fact that he is being called "warlike" shows the Chorus' admiration for Henry. The Chorus' biased opinion towards Henry influences the audience's view of Henry, allowing them to take a similar view to the Chorus. ...read more.

Henry again almost forces the men to fight saying he would not want to die next to a coward, "We would not die in that mans company". So to prove that the men are not cowards they fight so as not to be seen as weak. Henry's speeches and persuasive talks help him win both battles, as then the men want to fight. This is also shown when Henry talks of "us" in the majority of speeches, he talks to his army as an equal collective. His finale of "Cry 'God for Harry, England, and Saint George!'". This would also show Henry as a very patriotic king. Though also in Henry's speech he is quite rude to his men, "Dishonour not your mothers. Now attest that those whom you call fathers did beget you". This is clever and an effective way of rousing men's spirits, Henry almost forces his men to fight, as if they do not, it would mean they were illegitimate children. The fact that he can encourage men with low morale to fight reflects on Henry's kingship greatly. Henry's men are outnumbered 5 to 1 and the fact that they emerge victorious reflects on Henry, as his speeches must have roused the men's morale to go and fight even though they felt they had no chance of winning. "More will I do, though all I can do is nothing." This shows Henry's worries and how he feels inadequate with his possible future and outcome of the battle. ...read more.

Though Pistol's opinion is not always to be believed, since he knew the old "Hal" (Henry). This links in with how we also learn that some people do not admire Henry as a king. Bates, another solider in fact shows no compassion for his king. "He could wish him self in Thames up to the neck" this shows he feels Henry has led them to their death, and that this battle is not winnable. He does not view Henry as a good king, rather a king that has led his army to their defeat and eventual death. "I wish he were alone" this shows Bates' extreme dislike of Henry, he wishes that the King would fight the battle alone, so that his men would not be slaughtered. "A-many poor men's lives saved". Bates does however say he'll fight for the king so this shows some compassion for Henry. It is also ironic that the English emerge victorious, proving Bates to be wrong and showing that Henry's confidence to have rubbed of on others such as Bates Shakespeare's portrayal of kingship within the play shows how men evolve to become kings. Henry's leaves behind his wilder days to become a very successful king. We also see The Dauphin as uneducated and lacking wisdom, but his father is also a very respected king. So I think the message that Shakespeare is trying to put across is that people are not born to fit the role of a king, but that through experience and education one can become great. ...read more.