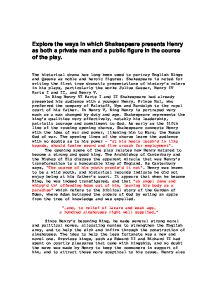 Explore the ways in which Shakespeare presents Henry as both a private man and a public figure in the course of the play.

Explore the ways in which Shakespeare presents Henry as both a private man and a public figure in the course of the play. The historical drama has long been used to portray English Kings and Queens as noble and heroic figures. Shakespeare is noted for writing the first true dramatic presentations of history's rulers in his plays, particularly the works Julius Caesar, Henry IV Parts I and II, and Henry V. In King Henry VI Parts I and II Shakespeare had already presented his audience with a younger Henry, Prince Hal, who preferred the company of Falstaff, Nym and Bardolph to the royal court of his father. In Henry V, King Henry is portrayed very much as a man changed by duty and age. Shakespeare represents the king's qualities very effectively, notably his leadership, patriotic courage and commitment to God. As early as the fifth line of the rousing opening chorus, Shakespeare connects Henry with the idea of war and power, likening him to Mars, the Roman God of war. The opening lines of the chorus leave the audience with no doubts as to his power - "at his heels leash'd in like hounds, should famine sword and fire crouch for employment". The opening scene of the play relates how Henry matured to become a strong and good king. The Archbishop of Canterbury and the Bishop of Ely discuss the apparent miracle that was Henry's transformation to a honourable king of England. As Canterbury says, "The course of his youth promis'd it not". ...read more.

Shakespeare follows with a more personal speech, with no formal language. The men are called "dogs" and "English monsters", and Henry particularly picks out Scroop, calling him a "cruel, ingrateful, savage and inhuman creature". In the scene it has been shown that Henry can make important decisions, even when the subject is personal, such as here, with the decision he makes to execute his friend for treason. Act III Scene I displays a rousing and pivotal speech made by Henry outside the gates of Harfleur, beginning "Once more unto the breach dear friends, once more..." attempting to unite his armed forces. The speech has a great impact, displaying Henry as a superb public figure and motivator. He publicly shows great determination to win the war not only for the people of England, but for his father and ancestors, people like the celebrated man of the period, Edward the Black Prince. Henry shows great faith in both country and army, and openly admits that England will triumph, as a way to boost the morale of his men, feeling low and in some cases very ill from days of walking through foreign countryside. During the speech, Shakespeare has shown that Henry is in touch with all parties within his army, addressing the soldiers, nobles and yeomen separately. Henry encourages his soldiers to "...imitate the action of the tiger..." encouraging his soldiers to mimic the animalistic behaviour of the tiger, giving them the ruthlessness, power, speed and agility of the creature as a collective. ...read more.

He believes that if the army dies, the blood will be left on Henrys' hands and God will punish him justly. This worries Henry greatly, and he proceeds to give a speech in defence of the king, using the examples of a boy and his father, and a servant and his master. In the speech he tries to show how the power of the King is absolute and his subjects have no choice over what they want to do, whereas the boy answering to his father and the servant answering to his master have a certain amount of freewill. When Henry continues, justifying the other side of the men's argument, he seems to be uncertain, saying that the king cannot be blamed for the individual actions of his soldiers. When Williams argues with Henry, the king remains reasonable and calm and accepts what Williams says; giving a clear demonstration of his ability to keep restrained when under pressure. Henry speaks in a soliloquy at the end of the scene, and appears to privately fight with his emotions. During his speech he discloses his beliefs that only private men can have private lives, and complains that there is a lack of consideration for him. As Henry is a young King, Shakespeare has in my opinion portrayed Henry brilliantly, as both a public figure that his countrymen can admire and serve proudly, and a private young man who seems to still be coming to terms with his royalty. I think that ultimately Shakespeare has represented Henry as an ordinary man who has had the greatness of Kingship thrust upon him. ?? ?? ?? ?? ...read more.