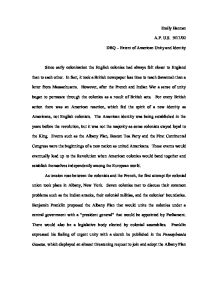 Extent of American Unity and Identity.

Emily Hannan A.P. U.S. 9/17/02 DBQ - Extent of American Unity and Identity Since early colonization the English colonies had always felt closer to England than to each other. In fact, it took a British newspaper less time to reach Savannah than a letter from Massachusetts. However, after the French and Indian War a sense of unity began to permeate through the colonies as a result of British acts. For every British action there was an American reaction, which fed the spirit of a new identity as Americans, not English colonists. The American identity was being established in the years before the revolution, but it was not the majority as some colonists stayed loyal to the King. Events such as the Albany Plan, Boston Tea Party and the First Continental Congress were the beginnings of a new nation as united Americans. These events would eventually lead up to the Revolution when American colonies would band together and establish themselves independently among the European world. As tension rose between the colonists and the French, the first attempt for colonial union took place in Albany, New York. Seven colonies met to discuss their common problems such as the Indian attacks, their colonial militias, and the colonies' boundaries. ...read more.

Since Britain's war debt had almost doubled, taxes were raised in England. The English merchants and landowners were incensed that the American colonists were not being taxed for what they believed was an American problem and war that the Americans should have to pay for. This was a display of an American identity separate from Englishmen. The British government then decided to directly tax the colonists with the Stamp Act. Any legal document or paper had to be stamped, which the colonists had to purchase. This was the first act established in American for the sole purpose of gathering revenue. This law inspired the saying, coined by John Dickinson, which became a famous cry of the colonists, "No taxation, without representation!" The Americans began to feel as though they were no longer Englishmen with the same rights. The Americans wanted the right to represent themselves in Parliament and consent to their own taxes. Even some Whigs in Parliament, such as Edmund Burke, thought the colonists had a point and should be represented, but George III would refuse it (Doc. B). In New England and New York colonists joined and boycotted British goods. In Virginia, the legislative body called the House of Burgesses created the Virginia Resolves that declared Virginia would not pay taxes that they did not create upon themselves. ...read more.

This was to be known as the first Continental Congress. Fifty-six delegates assembled at Philadelphia and talked about the issue with Boston. The colonies gathered supplies to be sent and help relieve the citizens of Boston (Doc. G). This was a sign of unity and concern for their fellow colonies. During the Continental Congress, the delegates wrote another Declaration of Right and Grievances asking that all laws passed by Parliament after 1763 be repealed. George III wouldn't even receive the document though. They also began to prepare their military by organizing their militias, gathering weapons and training men. They also established the Continental Association which would not trade with Britain. The American were uniting against there new common foe and becoming Americans (Doc. C). In the events that led up to the revolution, a sense of unity was definitely acquired, but an American identity was not as prevalent. Although there was a strong opposition to the British government, it did not represent the entire population of the American colonies. Many would still be loyal to the King and others would just side with whoever was winning. The southern colonies were more reluctant to part for Britain, because they were more reliant on Britain for trade of their cash crops. This rift in opinions would show itself throughout the war and even afterward while trying to draft a constitution. ...read more.