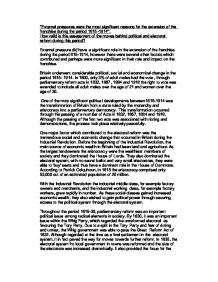 ''External pressures were the most significant reasons for the extension of the franchise during the period 1815-1914''. How valid is this assessment of the moves behind political and electoral reform during this period?

''External pressures were the most significant reasons for the extension of the franchise during the period 1815-1914''. How valid is this assessment of the moves behind political and electoral reform during this period? External pressure did have a significant role in the extension of the franchise during the period 815-1914, however there were several other factors which contributed and perhaps were more significant in their role and impact on the franchise. Britain underwent considerable political, social and economical change in the period 1815- 1914. In 1800, only 3% of adult males had the vote, through parliamentary reform acts in 1832, 1867, 1884 and 1918 the right to vote was extended to include all adult males over the age of 21 and women over the age of 30. ...read more.

They also dominated the electoral system, with no secret ballot and very small electorates, they were able to 'buy' seats and thus have a dominant role in the House of Commons. According to Patrick Colquhoun, in 1815 the aristocracy comprised only 53,000 out of an estimated population of 20 million. With the Industrial Revolution the industrial middle class, for example factory owners and merchants, and the industrial working class, for example factory workers, grew rapidly in number. As these social classes gained increased economic wealth, they also wished to gain political power through securing access to the political system through the electoral system. Throughout the period 1815-30, parliamentary reform was an important political issue among radical elements in society. ...read more.

Furthermore demand from the unenfranchised and radical pressure contributed to Gladstone introducing the Third Reform Act. The rise of trade unions and workers strikes, for example the London Dockers strike of 1889, led to further pressure for reform. However this external pressure was just one of many factors which affected the extension of the franchise during the period 1815-1914. Between 1865 and 1867, extra parliamentary agitation helped force an extension of the franchise. The 1867 Reform Act gave the franchise to artisans and in 1884 agricultural labourers were added. These changes meant that Britain was able to modernise its electoral system peacefully. The terms of the 1832, 1867 and 1884 Reform Acts were phrased in such a way as to allow a specific social class to enter the political process. In 1832 it was the industrial middle class, in 1867 the skilled working class and in 1884 the agricultural worker. ...read more.