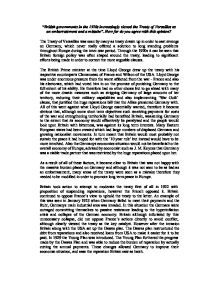 British governments in the 1920s increasingly viewed the Treaty of Versailles as an embarrassment and a mistake. How far do you agree with this opinion?

"British governments in the 1920s increasingly viewed the Treaty of Versailles as an embarrassment and a mistake". How far do you agree with this opinion? The Treaty of Versailles was seen by many as treaty drawn up in order to cast revenge on Germany, which never really offered a solution to long standing problems throughout Europe during the inter-war period. Through the 1920s it can be seen that Britain foreign policy was often shaped around the treaty, leading to significant efforts being made in order to correct the more arguable clauses. The British Prime minister at the time Lloyd George drew up the treaty with his respective counterparts Clemenceau of France and Wilson of the USA. Lloyd George was under enormous pressure from the worst affected from the war - France and also his electorate, which had voted him in on the promise of punishing Germany to the full extent of his ability. He therefore had no other choice but to go ahead with many of the more drastic measures such as stripping Germany of large amounts of ...read more.

Britain continued to oppose France's view to uphold the treaty to the letter. An example of this was seen in January 1923 when Germany failed to meet their payments and the Ruhr, Germanys main industrial area was invaded. In this situation the Germans were outraged committing themselves to passive resistance leading to the hyperinflation crisis and collapse of the German economy. Britain although infuriated by this unnecessary collapse, did not oppose France's actions directly to avoid conflict, although clearly viewed the treaty as the key catalyst. However after the invasion Britain along with the USA set up the Dawes plan. The Dawes plan restructured the debt from reparations and also received loans from USA to make it easier for it to be paid. In 1929 the Young Plan was introduced. The Young Plan furthered the progress made by the Dawes Plan and was able to reduce the burden of reparation by actually cutting the annual payments. These changes allowed Germany to improve their economic situation, and ease the reparation Britain saw as harsh. ...read more.

Britain also benefited from the treaty with its Middle Eastern territories. Britain received valuable territory in Iraq, Jordan and Israel. The land protected their Mediterranean trade routes, extremely important in upholding the empire. These areas however were only cemented with the pacification of Turkey after the Chanak crisis. However it only occurred after revising of the previous settlement, which mandated all Arab territories and demilitarised the straits in the 1923 Treaty of Lausanne. This showed Britain's willingness to correct problems faced instead of strictly upholding them and infringing their interests in doing so. It can be said in the 1920's Germany was sympathetic towards Germany and unfavorable to the French strict view. Britain did not approve of their irrational attitude towards security and aggressive policies. In the creation of the League of Nations Britain fashioned somewhere where arguable clauses could be negotiated. In this case Britain was extremely favorable towards the Germans, mainly due to their importance economically to Britain and Europe. Therefore it is unfair to say that the treaty was an embarrassment but instead a settlement containing a number of mistakes with room for improvement. ...read more.