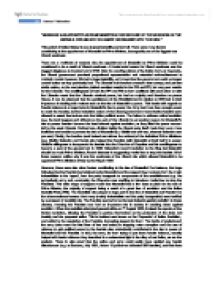 MUSSOLINI WAS APPOINTED AS PRIME MINISTER IN 1922 BECAUSE OF THE WEAKNESS OF THE LIBERALS. EXPLAIN WHY YOU AGREE OR DISAGREE WITH THIS VIEW.

"MUSSOLINI WAS APPOINTED AS PRIME MINISTER IN 1922 BECAUSE OF THE WEAKNESS OF THE LIBERALS. EXPLAIN WHY YOU AGREE OR DISAGREE WITH THIS VIEW." This period of Italian history is one of great instability and turmoil. There were many factors contributing to the appointment of Mussolini as Prime Minister, but arguably one of the biggest was Liberal weakness. There are a multitude of reasons why the appointment of Mussolini as Prime Minister could be considered to be a result of Liberal weakness. A fundamental reason for Liberal weakness was the dogged allegiance to involvement in WWI. After the crushing defeat of the Italian Army at Caporetto, the Liberal government promised proportional representation and extended enfranchisement to maintain morale: however, this led to huge instability, as it meant that the government could no longer control lection as they previously had. The Liberals had therefore created a less corrupt, and yet less stable nation, as the next election yielded excellent results for the PSI and PPI, but very poor results for the Liberals. ...read more.

All of these reasons outline why it was the weakness of the Liberal rule which allowed Mussolini to be appointed Prime Minister of Italy by the King in 1922. However, there were also other factors contributing to the rise of Mussolini. For instance, the huge following that the Fascists had attained under Mussolini and the support they received, from the major industrialists to the 'agrari', from the petty bourgeois to components of the establishment (e.g. the sympathetic army and, eventually, the King who was unwilling to introduce martial law to stop the Fascists). This wide range of support meant that Mussolini had a firm base to pitch for the role of Prime Minster, the majority of support being a result of a great fear of socialism and the Italian Socialist Party (PSI). The Socialists also played a huge part in the rise of Mussolini and Fascism for the aforementioned reason: that many (mainly industrialists and the petty bourgeoisie) were terrified by a prospect of socialist rule. ...read more.

electoral pact with Giolitti in 1921). The best example of Mussolini applying pressure on the government to make him Prime Minister was the proposed March on Rome, which ended up being a somewhat farcical and inconsequential march which Mussolini allowed to appease his violent followers and the ras. This pressure pushed the government into appeasing Mussolini by giving him power. All of the above factors were large factors in Mussolini's ascension to the highest office in Italian politics, and without any one of them, this rise to power may not have occurred, or may have simply been delayed. To say that Mussolini was appointed as Prime Minister in 1922 because of the weakness of the Liberals alone would be to miss out a huge portion of what was occurring in Italian society at the time. It would be fair to say that Liberal weakness played a large part in allowing Mussolini into office, but it was other factors (such as widespread fear of socialism and inertia of many components of the establishment) which gave Mussolini his base to make a push for power. ?? ?? ?? ?? ...read more.