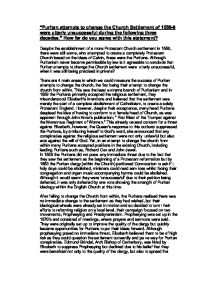 Puritan attempts to change the Church Settlement of 1558-9 were utterly unsuccessful during the following three decades. How far do you agree with this statement?

"Puritan attempts to change the Church Settlement of 1558-9 were utterly unsuccessful during the following three decades." How far do you agree with this statement? Despite the establishment of a more Protestant Church settlement in 1559, there were still some, who attempted to create a completely Protestant Church based on the ideas of Calvin, these were the Puritans. Although Puritanism never became permissible by law is it agreeable to conclude that Puritan attempts to change the Church settlement were utterly unsuccessful, when it was still being practised in private? There are 4 main areas in which we could measure the success of Puritan attempts to change the church, the first being their attempt to change the church from within. This was the least extreme branch of Puritanism and in 1559 the Puritans primarily accepted the religious settlement, they misunderstood Elizabeth's intentions and believed that the settlement was merely the start of a complete abolishment of Catholicism, to create a solely Protestant England. However, despite their acceptance, many head Puritans despised the idea of having to conform to a female head of Church, as was apparent through John Knox's publication; " First Blast of the Trumpet against the Monstrous Regiment of Women." This already caused concern for a threat against Elizabeth, however, the Queen's response to this outburst suppressed the Puritans, by attributing herself to God's word, she announced that any conspiracies against the religious settlement were not only unlawful but also acts against the will of God. ...read more.

It is apparent therefore, that although the Prophesying movement only posed a potential threat Elizabeth and her government took it seriously and dealt with it as swiftly as possible. By 1576, conversely, there was a majority of acceptance of the Calvin Geneva Bible, showing that the Puritan ideology was ever growing. The most threatening of Puritanism, that directly challenged Elizabeth's belief that the Church and state were ruled by monarch was Presbyterianism. Set up in the 1580's as a follow on from Prophesying, Presbyterianism based itself on groups of local clergy, who met regularly in secret to discuss the scriptures and common problems. Each local group corresponded with others and the 'network' was co-ordinated by John Field's London Group. The movement aimed to re-organise the government of the Church, along the lines of Calvin's Church in Geneva. Eventually the network failed after Field's efforts were not met elsewhere. 300-400 ministers were removed from office after Whitgift succeeded Grindal and improved uniformity within the Church. After the defeat of Presbyterianism by government it seemed that Puritanism was beginning to be defeated after yet another fail in their attempts to change the Church. The Puritans challenge in parliament ran throughout most of the three decades being assessed and was possibly the closest to success. The most famous debate on the Puritans in parliament is the Neale - Elton debate. ...read more.

Without hierarchy, no stability would reside over the country or Church so government refused to allow the Separatists what they wanted. The Separatists had no choice but to conform after the 'Act against Seditious Sectaries' of 1593, they either conformed or faced arrest and possible exile. This act showed the strong decisiveness of Elizabeth's government and after the Spanish war they knew the extent to which they needed to provide security. The act was left late by the government, as any earlier in Elizabeth's reign could have caused a rebellion that Elizabeth may have not been strong enough to withstand. In conclusion, although it would at first seem that Puritan attempts to change the Church settlement of 1558-9 was indeed utterly unsuccessful, it is important to remember that even though the settlement was never changed, the threat that Puritanism posed was of great significance not only to Elizabeth but also to her parliament. It is evident that the wide acceptance of Calvin ideology proved that the Puritans did not cease to spread their beliefs. Therefore, I would conclude that on the one hand the Puritans were utterly unsuccessful in changing the Church settlement of 1558-9, but were on the other hand successful in gaining much support and spreading their ideology and if it were not for Elizabeth's immediate action against such acts as Presbyterianism it could have been that the Puritans were given the opportunity to change the settlement. Katie Furnell - 13CUR ...read more.