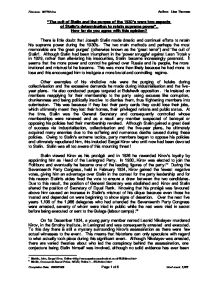 The cult of Stalin and the purges of the 1930(TM)s were two aspects of Stalin(TM)s determination to retain supreme power. How far do you agree with this opinion?

"The cult of Stalin and the purges of the 1930's were two aspects of Stalin's determination to retain supreme power". How far do you agree with this opinion? There is little doubt that Joseph Stalin made drastic and continual efforts to retain his supreme power during the 1930's. The two main methods and perhaps the most memorable are 'the great purges' (otherwise known as the 'great terror') and 'the cult of Stalin'. Although Stalin had been triumphant in the 'power struggle' against Leon Trotsky in 1929, rather than alleviating his insecurities, Stalin became increasingly paranoid. It seems that the more power and control he gained over Russia and its people, the more irrational and mistrustful he became. This was more than likely because he had more to lose and this encouraged him to instigate a more brutal and controlling regime. Other examples of his vindictive rule were the purging of kulaks during collectivisation and the excessive demands he made during industrialisation and the five-year plans. He also conducted purges targeted at Bolshevik opposition. He insisted on members reapplying for their membership to the party using excuses like corruption, drunkenness and being politically inactive to dismiss them, thus frightening members into submission. This was because if they lost their party cards they could lose their jobs, which ultimately meant they lost their homes, their privileged rations and public status. At the time, Stalin was the General Secretary and consequently controlled whose memberships were renewed and as a result any member suspected of betrayal or opposing his policies had their membership revoked. ...read more.

Everyone was a potential victim during this phase of the purges. The NKVD massacred kulaks, priests, former members of anti-Bolshevik armies, those who had been abroad or had relatives abroad, immigrants and even citizens.[8] The second show trial was held in January 1937, in which seventeen people stood accused, among them were Karl Radek, Yuri Piatakov and Grigory Sokolnikov. Thirteen of the defendants were executed, while the remainder were sent to the Gulags. The third show trial, held in March 1938, involved 21 defendants allegedly belonging to the "Bloc of Rightists and Trotskyites", whose leaders consisted of Nikolai Bukharin, Alexei Rykov, Genrikh Yagoda (former Head of the NKVD), Christian Rakovsky and Nikolai Krestinsky, all of whom were executed. The third phase of the great purges began in the spring of 1937 and was led by the NKVD which targeted the armed forces. Previously, many of the Red Army officers had been officers under the Tsarist regime and during Lenin's rule had been forged into the Red Army by Trotsky, causing Stalin to fear that they would turn against him and form a military dictatorship as an alternative government to his style of communism. Officers were by now living in fear of World War II breaking out and because they had earned their ranks on merit and had not bought them, they did not feel they owed Stalin any loyalty, increasing his fear of a military coup. ...read more.

As a result Stalin commanded Lavrenti Beria, the new Head of the NKVD, to purge the Communist Party of candidates for his leadership. However, on 2nd March Stalin suffered a brain haemorrhage resulting in the plan being terminated.[12] To this day, events surrounding his death have been shrouded with enigma as it has been claimed that the night before the haemorrhage, his guards were given orders, from Stalin himself, to retire for the night and not to disturb him. When he did not rise the next day at his usual time, the guards became concerned but did not interrupt him as they feared the repercussions of disobeying the dictator. That evening one of the guards was ordered to enter Stalin's room to investigate and on entry he found Stalin lying on the floor, paralysed, soon after he slipped into a coma. The guard summoned the senior party men of the Politburo and family members to the 'Dacha', Stalin's favourite holiday home. His daughter, Svetlana Alliluyeva's testimony claims that after 3 days (5th March 1953) Stalin briefly regained consciousness, looked around the room, raised his hand and pointed upwards as if "bringing down a curse upon us all" and then he died.[13] Conversely, due to the tardiness of the Politburo in calling for medical assistance, the Russian historian Edvard Radzinski asserts that Stalin was injected with poison by the guard Khrustalev, under the orders of his master (KGB chief, Lavrenty Beria to prevent Russia participating in the initiation of World War III.[14] In the end it was Stalin's own paranoia and tyranny that led to his demise. ...read more.