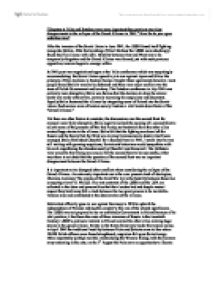 Disputes at Yalta and Potsdam were more important than previous war-time disagreements in the collapse of the Grand Alliance in 1945. How far do you agree with this view?

"Disputes at Yalta and Potsdam were more important than previous war-time disagreements in the collapse of the Grand Alliance in 1945." How far do you agree with this view? After the invasion of the Soviet Union in June 1941, the USSR found itself fighting along side Britain. After the bombing of Pearl Harbour the USSR more shockingly found itself in alliance with USA. Hostility between East and West was to be temporarily forgotten and the Grand Alliance was formed; yet with such previous opposition, tension began to emerge within. In 1945 post-war negotiations began at the Yalta conference which was surprisingly accommodating: the Soviet Union agreed to join war against Japan and follow the principle of free elections in Eastern Europe. Despite these agreements however, most people feared Stalin's word to be dishonest and there was major conflict over the issue of Polish Government and territory. ...read more.

The Orthadox view would be that timing was crucial for the second front to be successful; either way there is not doubt that the question of the second front was an important disagreement between the Grand Alliance. It is important not to disregard other conflicts when considering the collapse of the Grand Alliance. An extremely important one is the ever present clash of ideologies; Marxism-Leninism "the origins of the Cold War lay in the hostility between these two competing views" S. Phillips. The vast contrasts of the USSR and the USA are reflected in the ideas and personalities that their leaders had and despite mutual respect they held many felt a clash between the two great powers to be inevitable. Tension rose and contributed to the deterioration of the alliance. Britain had officially gone to war against Germany in 1939 to uphold the independence of Poland; making this country's fate one of the utmost significance. ...read more.

One issue that has not been mentioned is possibly the most important; suspicion seems to be a clear underpinning factor to all these disagreements that ultimately lead to the collapse of the Grand Alliance. Each of the events prior to, during and post-war have all increased suspicions that the USA and USSR were harbouring. Stalin was wary from the beginning after America's intervention of the Civil War that only just placed the Bolsheviks in power. The show trials illustrated the aggressive nature of Russia's government this combined with the information leaking from Riga created huge suspicions towards the USSR These foundations of tension were built up with further suspicions on deciding the second front, the clash of Marxism and Leninism, decisions made at Yalta and Potsdam, and the idea that a clash was inevitable. Thus this leads to the conclusion that all the factors played a part and that it was ultimately suspicion that heightened each situation so much that the Grand Alliance collapsed in 1945. ...read more.