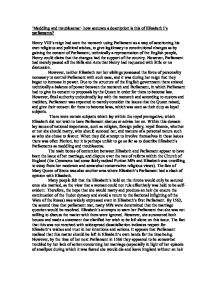 Meddling and troublesome(TM)- how accurate a description is this of Elizabeth I(TM)s parliaments?

'Meddling and troublesome'- how accurate a description is this of Elizabeth I's parliaments? Henry VIII's reign had seen the monarch using Parliament as a way of sanctioning his own religious and political wishes, to give legitimacy to constitutional changes as by gaining the consent of Parliament, technically a representation of the English people, Henry could claim that the changes had the support of the country. However, Parliament had merely passed all the Bills and Acts that Henry had requested with little or no discussion. However, neither Elizabeth nor her siblings possessed the force of personality necessary to control Parliament with such ease, and it was during her reign that they began to increase in power. Due to the structure of the English government there existed technically a balance of power between the monarch and Parliament, in which Parliament had to give its consent to proposals by the Queen in order for them to become law. However, final authority undoubtedly lay with the monarch and according to custom and tradition, Parliament was expected to merely consider the issues that the Queen raised, and give their consent for them to become laws, which was seen as their duty as loyal subjects. There were certain subjects which lay within the royal prerogative, which Elizabeth did not wish to have Parliament discuss or advise her on. Within this domain lay issues of national importance, such as religion, foreign policy, royal finance, whether or not she should marry, who should succeed her, and matters of a personal nature such as who she chose to favour. ...read more.

Despite the dissolution of this link when Francis died in 1562, the English suspicion of a Scottish-Franco alliance was still prevalent. Many feared that were Mary to take the throne, England would become a mere pawn of the continental power of France. Her Catholicism was also of course a huge threat as she became the figurehead for various Catholic plots, and hence her very existence was presented a threat to Elizabeth and her Government. As Catholics believed Elizabeth to be illegitimate they were anxious to have her replaced with the 'rightful' heir who in their eyes was Mary. By 1571 Parliament demanded the execution of Mary, following the exposure of the Ridolfi plot. Elizabeth's reluctance was seen as exasperating but of course, she held final say over the matter and Mary survived. She held her ground over the unremitting pressure and fought proposals to have Mary attainted and barred from the succession. It is not clear why she felt such reluctance to execute Mary, but perhaps it was a personal dislike of executing monarchy (she didn't want to give the impression that this was an acceptable thing to do), however unpragmatic this may have been. Elizabeth used her customary skill to divert parliament's attention to another matter. However, by the 1580s Mary represented such a danger to Elizabeth's personal safety that it became impossible for her to ignore the issue. ...read more.

On reflection Elizabeth's parliament still had a great deal of respect for her and in no way set out to undermine her authority or question her right or the right of the institution of the monarchy over them. When they did clash it was over issues on which Elizabeth's safety or that of the Tudor dynasty was at stake, indicating a concern for her welfare and that of the country rather than any significant differing of opinion or wish to create unrest. This is especially well illustrated over the marriage and succession issue, and the problem of Mary Queen of Scots. Therefore, although perhaps Parliament can be said to have illustrated more independence of opinion than ever before, Neale's theory of the Puritan Choir representing an opposition party within Parliament has been significantly discredited for us to safely say that Parliament was in fact an extension of Elizabeth's Privy Council, therefore working with her rather than against her. If anything on occasions where her occasionally irrational decisions threatened to pose a danger, her parliaments merely attempted to put enough pressure by public opinion to coerce her in to taking the lesser of two evils. So, while perhaps being more meddling than previously seen, it would be unfair to describe Elizabeth's Parliaments as troublesome as they were ultimately acting out of concern for Elizabeth's safety and a wish to create stability within England. ...read more.