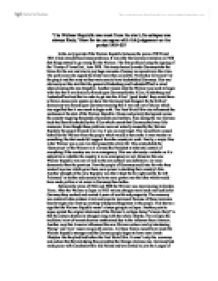 The Weimar Republic was weak from the start; its collapse was always likely.(TM) How far do you agree with this judgement on the period 1919-33?

'The Weimar Republic was weak from the start; its collapse was always likely.' How far do you agree with this judgement on the period 1919-33? In the early period of the Weimar Republic between the years of 1919 and 1923 it had already faced many problems. It was after the German revolution in 1918 that things started to go wrong for the Weimar. The first problem being the signing of the 'Treaty of Versailles', June 1919. This treaty basically made Germany take the blame for the war and also to pay huge amounts of money as reparation to the allies. The politicians who signed the treaty were then called the 'November Criminals' by the people and the army as they were seen to have backstabbed Germany. This was obviously not the start that the generals Hindenburg and Ludendorff had in mind when planning the new Republic. Another reason why the Weimar was weak to begin with was that it was basically forced upon Germany by the Allies. Hindenburg and Ludendorff realized that in order to get into the Allies' 'good books' they would have to form a democratic system to show that Germany had changed. ...read more.

Because of these increases hourly wages also went up creating widespread happiness in the people. This shows a sign that the Weimar Republic wasn't always going to collapse. Another point to argue against the original statement of the Weimar's collapse being "always likely" is that the culture drastically changed along with the whole lifestyle. For example the traditional view of women became undermined due to the influence from America. Another way that America influenced the new Weimar culture was by introducing 'Swing' and 'Jazz' music along with cinema. All these factors would have made the Weimar Republic stronger and the German people began to have more lavish lifestyles like they had had before the First World War. It wasn't only the economy and culture that thrived during this period but the foreign relations also. Germany had made peace with Czechoslovakia and Poland and was invited to join the League of Nations. Stresemann, the well respected foreign minister decided that it would be better to 'deal with' the 'Treaty of Versailles' then just complain about it. The allies saw this improvement in foreign affairs and in 1929 they evacuated the Rhineland. This also shows a great strength in the Weimar as Germany had finally found its feet again and was starting to regain its long lost power and reputation. ...read more.

Hitler had used propaganda against the depression: "Bread and Wine", to gain support of the suffering workers. With the grand Coalition collapsed and Von Papen losing support from the Reichstag the end of the Weimar Republic was near. In January 1933 Hitler and the Nazi party won in the elections and took power of Germany. I do not agree with the statement: 'The Weimar Republic was weak from the start; its collapse was always likely' as I do not believe that the collapse of the Weimar Republic was always going to happen. Personally I would say that it was extremely unfortunate to have had so many unrelated factors affect it so much. For example the Wall Street Crash was completely out of Germany's control but it had a massive effect on its economy and popularity. Similarly the state that Germany was left in after the First World War was also out of the Weimar's control but it also left the country in poverty and suffering. So I basically believe that the Weimar was given many problems that it couldn't have helped from happening but it actually managed to bypass them, even though in the end it was the Nazi party who used the weaknesses of the Weimar as their own strength and cleverly used propaganda to further their aim. ...read more.