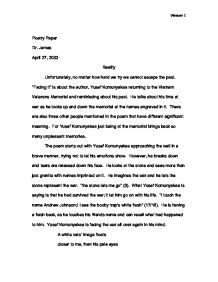 &quot;Facing It&quot; is about the author, Yusef Komunyakaa returning to the Vietnam Veterans Memorial and reminiscing about his past.

Poetry Paper Dr. James April 27, 2003 Reality Unfortunately, no matter how hard we try we cannot escape the past. "Facing It" is about the author, Yusef Komunyakaa returning to the Vietnam Veterans Memorial and reminiscing about his past. He talks about his time at war as he looks up and down the memorial at the names engraved in it. There are also three other people mentioned in the poem that have different significant meaning. For Yusef Komunyakaa just being at the memorial brings back so many unpleasant memories. The poem starts out with Yusef Komunyakaa approaching the wall in a brave manner, trying not to let his emotions show. However, he breaks down and tears are released down his face. ...read more.

The mother of the boy could have lost her older son in Vietnam, and this was her way of soothing her pain. Her running her hands through her son's hair could symbolize something she used to do with her older son who she has lost. Or it could just be a mother grooming her son's hair because it was messy. The impression that I got when I read those two lines was that the mother was brushing her son's hair to soothe her pain. In conclusion, Yusef Komunyakaa does end up 'facing it'. In the beginning he tries to hide and make himself believe that the war did not happen. He wants to believe that the names on the wall are a figment of his imagination. However, he realizes that the names are never going to erase and the Vietnam War did happen; now he has to face his past. Weaver 1 ...read more.