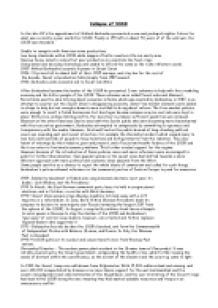 Factors in the collapse of the USSR.

﻿Collapse of USSR In the late 80's the appointment of Mikhail Gorbachev presented a new and perhaps brighter future for what was currently a poor and bitter USSR. Finally in 1991 after almost 50 years of of the cold war, the USSR was dissolved. Unable to compete with American arms productions. Low living standards within USSR while images of better western life are easily seen. Massive heavy industry output but poor production in essentials like food crops. Using dated and decaying technology and unable to afford the same as the richer Western world. 1985: Mikhail Gorbachev ascends to power in Soviet Union 1986: Oil prices fall to almost half of their 1985 average, and stay low for the rest of the decade. Soviet oil production falls steeply from 1987 onward. ...read more.

However, this backfired as the public learned of long-standing political cover ups revealing past and recent atrocities, for example the Chernobyl incident which caused many to lose lives and hundreds of people to have mutations and disfigurements from the radiation. They also learnt of missteps by their leaders, past and present, and of social and health failures of the USSR and the true extent of national economic problems. This further eroded support for the regime. However because of the introduction of these policies, more and more reformers were encouraged to push for further liberalisation. Soon popular opinion in the soviet union had shifted towards a more Western approach with more political and economic ideas adopted from the West. Some people saw this as a chance to reject the whole ideals of communism and called for such things. ...read more.

In July, the Warsaw Pact is dissolved. 1990-91 USSR pulls out its nuclear and conventional forces from Warsaw Pact nations. Cherynobyl Disaster - The nuclear power plant accident in the Ukraine town of Cherynobyl. It was initially covered up by the Soviet government, compounding the health crisis, while further sowing the seeds of distrust within the constituency, as the extent of the disaster and the cover-up came to light. In 1989 the Soviet troops are withdrawn from Afghanistan. With 15,000 soldiers dead and missing and over 400,000 incapacitated by disease or serious illness, support for the war had dwindled and the soviets misjudgement and underestimation of the Mujahideen, and the over stretching of the Soviet troops had lead to the USSR losing the war, meaning they had wasted valuable resources and troops in an unnecessary conflict. External Factors 1983: President Reagan proposes Strategic Defense Initiative (STAR WARS) ...read more.