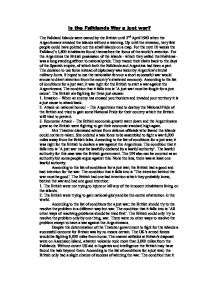 Is the Falklands War a just war? The Falkland Islands were owned by the British until 2nd April 1982 when the Argentineans invaded the islands without a warning. Up until the invasion, very few people could have pointed out the small islands on a map. For the next 10 weeks the Falkland's 1,800 inhabitants found themselves the focus of the world's attention. For the Argentines the British possession of the islands - which they called the Malvinas - was a long standing affront to national pride. They traced their claim back to the days of the Spanish empire, of which both the Falklands and Argentina had been a part. The decision to use force instead of diplomacy was taken by Argentina's brutal military Junta. It hoped to use the nationalist fervour a short successful war would arouse to divert attention from the country's shattered economy. According to the list of conditions for a just war; it was right for the British to start a war against the Argentineans. ...read more.

The condition that it falls into is 'The means used must be in proportion to the end that the war seeks to achieve'. The British did eventually win the war due to a resignation by the Argentineans. They ended the war straight away as soon as they won it and had achieved their intention. They did not want to kill innocent people. The Falklands War was nearly a Just War. The British had fought the war for a just cause/s. The war was lawfully declared by lawful authority e.g. government. There were no other ways of trying to resolve the war but peace which the British did first but the Argentines did not agree so the only other choice was war. The British also ended the war as soon as they had won the war and the Argentines had resigned. The intention behind the war was good but they were trying to gain national glory. There was not a reasonable chance of success as they were fighting over 8000 miles from home. Dhruvin Patel ...read more.