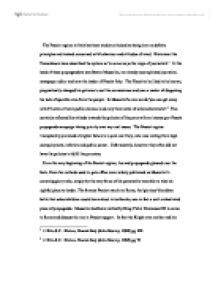 The Fascist regime in Italy has been widely criticised as being low on definite principles and instead concerned with behaviour and attitudes of mind. Historians like Tannenbaum have described the system as 'in some ways the reign of journalists'.1 At the head of these propagandists was Benito Mussolini, an already accomplished journalist, newspaper editor and now the leader of Fascist Italy. The 'Duce' as he liked to be known, pragmatically changed his policies to suit his convenience and was a master of disguising his lack of specific aims from the people. In Mussolini's own words 'you can get away with 97 cents of mere public clamour and only three cents of solid achievement'.2 This certainly reflected his attitude towards the policies of his party with an intense pro-Fascist propaganda campaign taking priority over any real issues. The Fascist regime triumphantly promised a brighter future to a post-war Italy, who was reeling from high unemployment, inflation and public unrest. Unfortunately, however they often did not have the policies to fulfil the promises. From the very beginning of the Fascist regime, lies and propaganda glossed over the facts. Even the methods used to gain office were widely publicised as Mussolini's crowning glory who, simply by the very force of his personality was able to take his rightful place as leader. The famous Fascist march on Rome, the 'glorious' bloodless battle that schoolchildren would learn about in textbooks, was in fact a well orchestrated piece of propaganda. ...read more.

As a result of fields being turned over to wheat crops, land for livestock grazing was scarce and therefore became more expensive. Furthermore, there was a significant increase in the amount of imported beef and poultry to balance the misuse of agricultural land and resources. This combination of factors lead to an increase in the prices of these products and fewer Italians could afford to include them in their daily diet. As historian D. Mack Smith said, "Success in this battle was...another illusory propaganda victory won at the expense of the Italian economy in general and consumers in particular".7 The Fascist regime toiled not just in the fields of southern Italy, but into the family lives of its followers. One of Mussolini's main goal was to create a military capable of providing and later defending the new 'Roman Empire' that the Fascist party were going create. He promised the people of Italy that he could bring this about and introduced what he considered to be appropriate measures. The intention behind the policies was to boost the population of Italy, providing a greater human resource, and was therefore named the 'Battle for Births'. The 'battle' was started with Mussolini aligning himself with the church in stressing the importance of marriage and child rearing. He encouraged mothers to have children by awarding medals and promising better healthcare. To support the 'propaganda machine', the Fascist regime passed new laws to make it more profitable for families to produce offspring. ...read more.