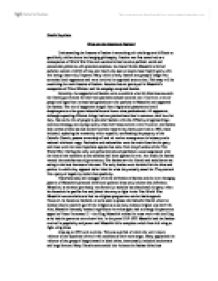 Natalie Baynham What are the features of Fascism? Understanding the features of fascism is something of a challenge and difficult to specifically define due to its changing philosophy. Fascism was first conceived as a consequence of World War One and was determined to solve political, social and economical problems with practical solutions. Its creator Benito Mussolini a former socialist wanted a rebirth of Italy and return the state to its previous Empiric glory with him being a latter-day Emperor. Many think of early fascism as a group of thugs who terrorised their opponents and were involved in organised street crime. This essay will be examining the main features of fascism, features that are portrayed in Mussolini's occupation of Prime Minister and his campaign to spread fascism. Generally, the supporters of fascism were ex-soldiers who felt bitterness towards the liberal government for their non-patriotic attitude towards war. However, a mix of people and ages from various backgrounds saw the qualities in Mussolini and supported the fascists. The mix of supporters ranged from disgruntled peasants and small shopkeepers to a few great industrialists and lower-class professionals. All supporters, although expecting different things, had one predominate idea in common; their love for Italy. ...read more.

Many fascist believed they lay between the workings of the political system and their former radical ideas for a revolution. It boiled down to a struggle between two ideas, the first a radical revolution supported by the ras, particularly Farinacci who hoped for a radical revolution, to replace non-fascist intuitions with fascist one, to make Italy a one party state with banned opposition, for fascist syndicates to control the media and for a strong government to deal with enemies. The second, normalisation supported by the Nationalist Party, Industrialists and landlords. The industrialists and landlords were extremely wealthy and provided a financial backbone for the fascists. Mussolini realised that he couldn't risk losing the support of the industrialists and landlords and so opted for the programme of normalisation. However, in 1922 Mussolini ad made it into office as yet another coalition Prime Minister aware that there were those who doubted his capability. This made him all the more determined to succeed and a strong coalition government. At first Mussolini found the fascism acceptance difficult with only 32 fascist deputies in the Chamber of 535. Henceforward the National Government was created that consisted mostly of non-fascists. ...read more.

Military victory was key to pushing Italy up the success scale of Europe. Indeed, historians such as Denis Mack-Smith and Eric Hobsbawm argue that from the off-set fascist ideology was a difficult task to define. Denis Mack-Smith in 'Mussolini' (1982) argues that fascist ideas were confused and inconsistent. Also, he states that, the essence of fascism was action and the attempts to provide a fascist philosophy were not the source for political activity but merely an attempt to justify what had been done at an opportunistic level. After examining of the Features of Fascism the conclusion has been met that there are no particularly clear features of fascism except the idea of nationalism. Due to changing personal ideals and political policies Mussolini himself has hindered the definition of the party. Unlike other dictators such as Hitler, Mussolini didn't ever lay a clear set of aims and policies on the political agenda which confused the fascist ideology. However, Fascism can certainly describe a ring-wing movement in the 1920s and 1930s, where its origins stemmed from the First World War. It is justified to state that even the homeland was unclear on its government's policies and probably, to a certain degree, Mussolini didn't understand the true aims of his party, except his greed for success and glory. ...read more.