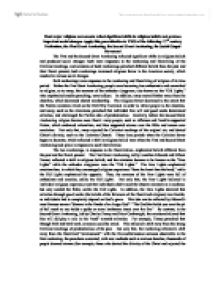 Most major religious movements reflect significant shifts in religious beliefs and produce important social changes. Apply this generalization to TWO of the following: 17th century Puritanism, the First Great Awakening, the Second Great Awakening, the Social Gospel Movement The First and the Second Great Awakening reflected significant shifts in religious beliefs and produced social changes: both were responses to the weakening and liberalizing of the Calvinist teachings, and ministers of both awakenings preached different beliefs from the past and their liberal present; both awakenings increased religious fervor in the American society, which resulted in various social changes. Both awakenings were responses to the weakening and liberalizing of religion of its time period. Before the First Great Awakening, people were becoming less enthusiastic and committed to religion, as to many, the sermons of the orthodox clergymen, also known as the "Old Lights," who emphasized erudite preaching, were tedious. In addition, many moved farther away from the churches, which decreased church membership. ...read more.

The New Lights emphasized emotionalism, in which they encouraged religious experience "from the heart than the head," while the Old Lights emphasized the opposite. Thus, the sermons of the New Lights were full of enthusiasm and emotion, unlike the Old Lights'. Not only that, the New Lights believed in individual religious experience and that individuals didn't need the Church ministers as a mediator, but only needed the Bible, unlike the Old Lights. In addition, the New Lights declared that salvation through good works (the beliefs of the followers of the liberalized religions) was foolish, as individuals had to completely depend on God's grace. This idea can be reflected by Edward's most famous sermon "Sinners in the Hands of an Angry God": "The God that holds you over the pit of hell much as one holds a spider or some loathsome insect over the fire." By contrast, in the Second Great Awakening, led by Charles Finney and Peter Carthwright, the ministers believed that free will did play a role in the "road" towards salvation. ...read more.

In addition, for the first time in US history, the people participated in a spontaneous mass movement, which decreased sectionalism. After the Second Great Awakening, church participation and missionary works increased. For example, the American Bible Society was established. Also, it led to the emergence of new religious sects, such as the Adventists and the Mormons, and the division between the Northern Methodists with its Southern counterpart. Most importantly, the second awakening led to significant social reforms, such as women's rights, temperance, and abolition. These reforms were at many times headed by important females, whose participation in religion increased due to the awakening (Finney encouraged it), and gradually so did their participation in society: the females tried to save society from sins. Without doubt, the two awakenings resulted in significant social changes. The two Great Awakenings similarly reflected the shifts in religious beliefs, as the ministers preached those different from the past and their liberal present, in order to bring about significant social changes, mainly caused by the increase of religious fervor in America. ?? ?? ?? ?? ...read more.