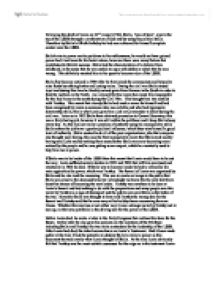 Following the death of Lenin on 22nd January 1924, Stalin, 'man of steel', rose to the top of the USSR through a combination of luck and by using his political skills.

Following the death of Lenin on 22nd January 1924, Stalin, 'man of steel', rose to the top of the USSR through a combination of luck and by using his political skills. Therefore by Stalin's fiftieth birthday he had now achieved for himself complete control over the USSR. Stalin's rise to power can be put down to his ruthlessness; he would not have gained power had it not been for his brutal nature, however there were many factors that contributed to Stalin's success. Stalin had the characteristics of a dictator from childhood, in the sense that he was unable to cope with defeat or admit that he was wrong. This definitely assisted him in his quest to become ruler of the USSR. Stalin first became noticed in 1905 after he first joined the communists and helped to raise funds by robbing banks and looting trains. During the civil war Stalin stayed loyal and during this time he forcibly seized grain from farmers in the South in order to feed the workers in the North. As a reward for this Lenin then made him responsible for the Red Army in the south during the Civil War. This brought him into conflict with Trotsky. This meant that already Stalin had made a name for himself and had been recognised by Lenin as someone who was reliable and who had impressive dictatorship skills, this is why Lenin gave him a job as Commander in Chief during the civil war. ...read more.

Before Lenin died, he wrote a letter to the Party Congress that outlined his ideas for the future. In this letter he also gave his opinions on the members of the Politburo including Stalin and Trotsky, the two main contenders for the leadership of the USSR. After Lenin had died, the letter became know as Lenin's Testament. Had it been made public at the time it had the potential to destroy Stalin's claim to power as this document showed exactly what Lenin thought of Stalin. At the time Lenin obviously felt that Trotsky was the most suitable successor for the reign as in his testament Lenin described Trotsky as 'a man with outstanding ability' and he also thought Trotsky was 'perhaps the most capable man in the Central Committee'. Lenin saw Stalin as 'too rude' and he wanted Stalin to 'be removed from his post as General Secretary'. Meanwhile Stalin must have been shaken when he heard about what Lenin had to say about him. What Lenin thought of these two candidates was crucial, as the public would not want an enemy of Lenin's to be the next leader. This is why Stalin appeared to be very close to Lenin and stand by him. However in spite of these comments the Testament was not made public. ...read more.

With Trotsky now out of the way, Stalin was now on course to take the leadership of the USSR, he uses his relationship and his positions of authority with other members of the Politburo extremely well. Stalin successfully played both the leftists and the rightist in the Politburo; he did this by using his friends who owed him favours. In 1927 Stalin first joined the rightists and attacked the left removing all the important members from the office, then a year later he joined the leftists and attacked the right, forcing out his opponents and bringing in some of his own allies who would support him. By doing this Stalin was now the most senior member of the Politburo. This was a huge step towards his aim and put him in pole position to become the next dictator. In conclusion I believe that Stalin achieved total power over the USSR through a combination of political scheming, luck, the mistakes of his opponents and the clever way in which he built up his power base. Each event that leads up to Stalin's dictatorship was just as important as the next; he got to power through a combination of all of these. If any of the steps to his reign had been missing, there is no doubt that he would not have been in control of the USSR and been able to cause the damage he did. ...read more.