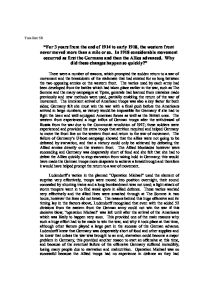 For 3 years from the end of 1914 to early 1918, the western front never moved more than a mile or so. In 1918 considerable movement occurred as first the Germans and then the Allies advanced. Why did these changes happen so quickly?&amp;#148;

Tom Ilett 5B "For 3 years from the end of 1914 to early 1918, the western front never moved more than a mile or so. In 1918 considerable movement occurred as first the Germans and then the Allies advanced. Why did these changes happen so quickly?" There were a number of reasons, which prompted the sudden return to a war of movement and the breakdown of the stalemate that had existed for so long between the two opposing armies on the western front. The tactics used by each army had been developed from the battles which had taken place earlier in the war, such as The Somme and the many campaigns at Ypres, generals had learned from mistakes made previously and new methods were used, partially enabling the return of the war of movement. The imminent arrival of American troops was also a key factor for both sides; Germany felt she must win the war with a final push before the Americans arrived in large numbers, as victory would be impossible for Germany if she had to fight the keen and well equipped American forces as well as the British ones. ...read more.

The reasons behind this huge offensive and its timing lay in the factors above, Ludendorff recognised that even with the added 52 divisions from the eastern front the German army could not win the war if this decisive blow, "operation Michael" was left until after the arrival of the Americans which was likely to happen very soon. This provided one of the main reasons why such a huge effort had to be made to win the war, and why it took place at that time, although other factors played a large part in the success of the German advance. Ludendorff knew that Germany was desperately short of food and other supplies and he knew that unless the war was brought to an end, starvation could become a major problem in Germany, this provided another reason to start an offensive at this time, and because of the eventual failure of the offensive Germany suffered incredibly, losing many people due to starvation and malnutrition. ...read more.

There were therefore a number of different reasons why the war which had been one of stalemate for three years suddenly changed into one of movement, first of Germany and secondly of the Allies. The main reason for the initial movement from Germany was that the imminent arrival of fresh American troops would prevent a victory from taking place if the moment could not be seized, and a large offensive or a "final push" could not be made before the Americans arrived in large numbers. Ludendorff planned this offensive and it almost succeeded, however the belief among allied troops that if they could "hang on" until the Americans arrived the war could be won meant that the troops did not give up and the line did not break; indeed the line was forced back due to an Allied counter attack to its original position, and soon after an armistice sought and the war won by the Allies. ...read more.