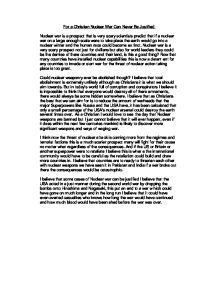 For a Christian Nuclear War Can Never Be Justified.

For a Christian Nuclear War Can Never Be Justified Nuclear war is a prospect that is very scary scientists predict that if a nuclear war on a large enough scale were to take place the earth would go into a nuclear winter and the human race could become extinct. Nuclear war is a very scary prospect not just for civilians but also for world leaders they could be the demise of there countries and their land, is this a good thing? Now that many countries have installed nuclear capabilities this is now a deterrent for any countries to invade or start war for the threat of nuclear action taking place is too great. ...read more.

I believe that as Christians the best that we can aim for is to reduce the amount of warheads that the major Superpowers like Russia and the USA have, it has been calculated that only a small percentage of the USA's nuclear arsenal could destroy the earth several times over. As a Christian I would love to see the day that Nuclear weapons are banned but I just cannot believe that it will ever happen, even if it does within the next few centuries mankind is likely to discover more significant weapons and ways of waging war. ...read more.

I believe that countries are to ready to threaten each other with nuclear weapons we have seen it in Pakistan and India if a war broke out there the consequences would be catastrophic. I believe that some cases of Nuclear war can be justified I believe that the USA acted in a just manner during the second world war by dropping the bombs onto Hiroshima and Nagasaki, this put an end to a war which could have gone on much longer and in the long run I believe that it could have even averted casualties who knows how long the war would have continued and how much blood would have been shed before the war was over. ...read more.