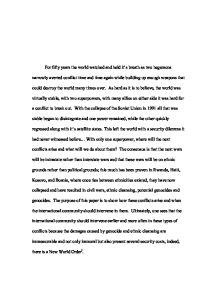 For fifty years the world watched and held it's breath as two hegemons narrowly averted conflict time and time again while building up enough weapons that could destroy the world many times over.

For fifty years the world watched and held it's breath as two hegemons narrowly averted conflict time and time again while building up enough weapons that could destroy the world many times over. As hard as it is to believe, the world was virtually stable, with two superpowers, with many allies on either side it was hard for a conflict to break out. With the collapse of the Soviet Union in 1991 all that was stable began to disintegrate and one power remained, while the other quickly regressed along with it's satellite states. This left the world with a security dilemma it had never witnessed before... With only one superpower, where will the next conflicts arise and what will we do about them? The consensus is that the next wars will be intrastate rather than interstate wars and that these wars will be on ethnic grounds rather than political grounds; this much has been proven in Rwanda, Haiti, Kosovo, and Bosnia, where once ties between ethnicities existed, they have now collapsed and have resulted in civil wars, ethnic cleansing, potential genocides and genocides. The purpose of this paper is to show how these conflicts arise and when the international community should intervene in them. Ultimately, one sees that the international community should intervene earlier and more often in these types of conflicts because the damages caused by genocide and ethnic cleansing are immeasurable and not only immoral but also present several security costs, indeed, there is a New World Orderi. In order to establish this "moral criterion for intervention" we must first establish that there are some values that are held to be universal, and that these values should be upheld over values of a certain culture. ...read more.

Soon, Macedonia and Bosnia Herzegovina followed. The only thing left of what was once a powerful Yugoslavia was Serbia, Kosovo, and Montenegro. Croatia and Serbia began to stabilize and conflict began to ensue in Bosnia and then escalated into a full-scale war that began to engulf the entire regionx. Soon the international community began to intervene in the Bosnia conflict, finding evidence of mass graves and ethnic cleansing, the UN soon put sanctions on Serbia for backing rebel Serbs in Croatia and Bosnia. In 1993 the conflict took a new twist as Muslims and Croats began to fight each other after several peace agreements failed and the two allies against Serbs soon became enemies. It is this sudden turn of events that puzzles most political scientists; what made two groups that had been fighting in the same trenches, united against the same enemy suddenly become enemies themselves? This still puzzles many people, that one-day you could be brothers and the next day you can be mortal enemies; this is the reason why intervention is necessary and it is the only option. In 1995, NATO started an air strike against Bosnian Serbs and soon after the two sides reached a peace agreement. As the Bosnian conflict began to calm down cries of help were heard from nearby Kosovo, where the Kosovo Liberation Army (KLA) was making its stake in the area well known. In 1997, tensions grew as Serbian nationalist Slobodan Milosevic was sworn in as president of Yugoslavia and grew again in 1998 as the Yugoslav army launched a crackdown on KLA separatists in Kosovoxi. In September of 1998 NATO issued an ultimatum to Milosevic to stop the crackdown in Kosovo or face air strikes. ...read more.

This could be carried out with other countries as well. It is clear that the United States shoulders a great burden as we enter the new millennium, what is less clear is what we can do about this burden. Therefore the criterion for intervention is: military intervention into another state's affairs is morally obligated whenever a society of peoples contextualized social relations have been destroyed and when there is evidence of ethnic cleansing and genocide. It is important for the United States to intervene in these conflicts because when the United States does something, other nations follow their lead. We must start nation building rather than being a policeman, this is what will help make a New World Order. i Remark made by then president George Bush after communism collapsed in the Former Soviet Union ii Ignatieff, Michael. The Warrior's Honor: Ethnic War and the Modern Conscience. New York: Metropolitan Books, 1998 Page 18 iii Said, Edward W. Culture and Imperialism. New York: Random House 1993 page 67 iv Said, 168 v Ignatieff, 19 vi Said, 80 vii Rawls, John. The Law of Peoples. Cambridge: Harvard University Press, 1999. Page 81 viii www.kosovo.org/timeline.html ix Robert J. Jackson and Doreen Jackson. An Introduction to Political Science Comparative and World Politics. Scarborough, Ontario: Prentice Hall, 2000 Page 226 x Jackson and Jackson, 226 xi Los Angeles Times "Timeline of Milosevic's Nationalism" 9/27/2000 xii LA Times 9/27/2000 xiii www.cnn.com 11/23/2000 xiv Elshazly, Karen. "United States Culpability in Rwanda" Washington Times, 7/27/2000 xv Gewirth, Alan. 1982 Human Rights: Essays On Justifications & Applications. Page 228 xvi Elshazly, 2nd paragraph xvii Ignatieff, 104 ...read more.