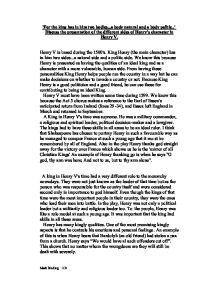 'For the king has in him two bodies...a body natural and a body politic..' Discuss the presentation of the different sides of Henry's character in Henry V.

'For the king has in him two bodies...a body natural and a body politic..' Discuss the presentation of the different sides of Henry's character in Henry V. Henry V is based during the 1500's. King Henry (the main character) has in him two sides...a natural side and a politic side. We know this because Henry is presented as having the qualities of an ideal king and as a character with a more vulnerable, human side. From having these personalities King Henry helps people run the country in a way hat he can make decisions on whether to invade a country or not. Because King Henry is a good politician and a good friend, he can use these for contributing to being an ideal King. Henry V must have been written some time during 1599. We know this because the Act 5 chorus makes a reference to the Earl of Essex's anticipated return from Ireland (lines 29-34), and Essex left England in March and returned in September. A King in Henry V's time was supreme. He was a military commander, a religious and spiritual leader, political decision-maker and a lawgiver. The kings had to have these skills in all areas to be an ideal ruler. I think that Shakespeare has chosen to portray Henry in such a favourable way as he managed to conquer France at such a young age that it must be remembered by all of England. ...read more.

He did this because it allows the audience and his subjects to identify him. We have proof of this shown throughout the play. Like everyone else, Henry has a relationship. In this case, with two people; Williams and Fluellen, who are different as they are in the lower class. Henry puts aside this fact, and shows us that he can be like anybody else. Another point of when Henry is being shown as a man is when he disguises himself so he can hear what the soldiers think will happen. The discussion is between Henry and Bates. They are talking about their likely fate in the coming battle. Henry makes the point that the King experiences the same emotions as ordinary men, including fear. An example of Henry saying this is "No; nor it is not meet he should. For, though I speak it to you, I think the King is but a man, as I am." This quotation is showing that the King wants others to see he is just like them and should not be judged badly. Before the Battle of Agincourt, Henry thinks about the burden of responsibility and that him being a King, distinguishes the difference from an ordinary man. Also, Kings have so many cares that they are unable to enjoy a peaceful nights sleep. ...read more.

By using 'We' repeatedly, the men think that everyone is worth the same. This is another way in which we can see Henry is a great king. The way in which we see Henry being a great man could be his honest conversation with Williams. Replying to the argument of Williams, Henry argues that a king cannot be held responsible for the souls of those soldiers who die without having represented their sins. Henry says this in true honesty from what he is thinking. He says "the king is not bound to answer the particular endings of his soldiers, the farther of his son, nor the master of his servant, for they purpose not their deaths, when they purpose their services." Henry says this in a very clever way as he manages to persuade the three men that every man is responsible for his own soul. This also shows Henry's persuasive skills, which can also contribute to our under-standing or his human character. In conclusion, Henry having a body politic and a body natural both contribute into making a better king. Shakespeare had written the play, in words that clearly show the two sides of Henry and how well he uses them. Henry V was an ideal king for Shakespeare to use in front of his audience. It is very important that we see the two sides of Henry because this way, it helps people to understand his character more. Mark Binding 11B ...read more.