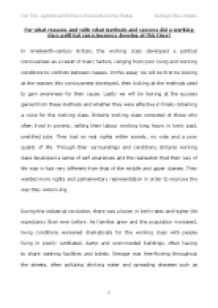 For what reasons and with what methods and success did a working class political consciousness develop in nineteenth-century Britain?

﻿Unit Title: Agitation and Reform in Nineteenth-Century Britain Kayleigh Giles-Johnson For what reasons and with what methods and success did a working class political consciousness develop at this time? In nineteenth-century Britain, the working class developed a political conciousness as a result of many factors, ranging from poor living and working conditions to conflicts between classes. In this essay we will be first be looking at the reasons this conciousness developed, then looking at the methods used to gain awareness for their cause. Lastly we will be looking at the success gained from these methods and whether they were effective in finally obtaining a voice for the working class. Britains working class consisted of those who often lived in poverty, selling their labour working long hours in lowly paid, unskilled jobs. They had no real rights within society, no vote and a poor quality of life. Through their surroundings and conditions, Britains working class developed a sense of self awareness and the realisation that their way of life was in fact very different from that of the middle and upper classes. They wanted more rights and parliamentary representation in order to improve the way they were living. During the industrial revolution, there was a boom in birth rates and higher life expectancy than ever before. As families grew and the population increased, living conditions worsened dramatically for the working class with people living in poorly ventilated, damp and overcrowded buildings, often having to share washing facilities and toilets. ...read more.

In 1868, the Trade Union Congress (TUC) was formed as a body representing the majority of the unions in Britain, indicating that trade unionism had become a significant national movement (Lynch, 1999, p. 181). As a result of demand for semi-skilled and unskilled workers, by the 1880's a new movement developed to meet the needs of the unskilled working class. These were known as New Unions and saw the formation of many societies such as the Gas Workers' Union, Dockers' Union and Miners Federation. Unlike the Model Unions, these new groups were more open to striking as a way to get their point across. In 1888, the women workers in the Bryant and May match factory in London struck (known as the Match Girls' Strike) in order to change their dangerous working conditions, which included being exposed to phospherous on a daily basis in the factory. This was extremely dangerous and lead to diseases such as "phossy jaw", a disfiguring and painful disease which caused ulceration of the skin and softening of the bone (Lynch, 1999, p.182). The strike, although partially successful in securing the women a pay rise, unfortunately resulted in no change in their hazardous conditions. A year later in 1889, encouraged by the success of the gasworkers in obtaining eight hour days from their employers in the 1880's, the dockers went on strike, lead by John Burns, Tom Mann and Ben Tillett. Their main demand was for implementation of the 'Dockers' Tanner', meaning a basic pay rate of sixpence an hour. ...read more.

The Dockers' Strike was a big success for those who campaigned for fairer wages, however it was not always so, as in the case of the Match Girls' who did not secure any sort of changes to those life-threatening conditions in the workplace. Through the work of the unions, many changes were made such as a vote for the working class where they had no rights before. The main point is that it brought to light the need for political representation, and as a result of the Taff Vale strike ruling, this became a reality with the formation of the Labour Party which ensured that the working class finally had its place in society. In conclusion, through the appalling working and living conditions the majority of working class Britain had to endure throughout the nineteenth century, developing a political conciousness was a natural step to take in securing real rights and a better quality of life within their society. Through achieving realisation of their unacceptable treatment at work, home and in society, they were able to band together to fight for their cause. Finally achieving not only a place in Parliament, but a voice that they had never had before, was the outcome of many years of hard work to change things for the better. Reference List Books: Lynch, M (1999), An Introduction to Nineteenth Century British History 1800-1914, UK: Hodder Education Jenkins J, Evans E (2002), Victorian Social Life, British Social History 1815-1914, London: John Murray Ltd. Websites: Health & Sanitation, Available online at: http://www.historylinks.org.uk/Schoolpacks/Secondarypack/Secondary%20School%20Pack%20-%20Health%20&%20Sanitation. ...read more.