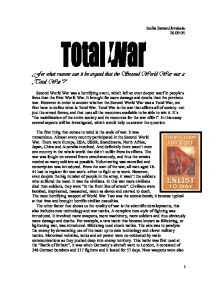 &quot;For what reasons can it be argued that the Second World War was &quot;Total War&quot;

Ioulia Samouilovskaia. 26.09.05. "For what reasons can it be argued that the Second World War was a "Total War"?" Second World War was a horrifying event, which left an even deeper scarf in people's lives than the First World War. It brought far more damage and deaths than the previous war. However in order to answer whether the Second World War was a Total War, we first have to define what is Total War. Total War is the war that affects all of society- not just the armed forces, and that uses all the resources available to be able to win it. It's "the mobilization of the entire society and its resources for the war effort". In this essay several aspects will be investigated, which would help us answer the question. The first thing that comes to mind is the scale of war. It was tremendous. Almost every country participated in the Second World War. There were Europe, USA, USSR, Scandinavia, North Africa, Japan, China and Australia involved. And definitely there wasn't even one country in the whole world that didn't suffer from its effects. The war was fought on several fronts simultaneously, and thus the armies needed as many soldiers as possible. ...read more.

In Germany, Hamburg became the center of war production. And in the years between 1936-1939, 2/3 of all industrial investment went into war-related projects. In every country the factories turned to war production. Even the American industry changed to war production after the Japanese attack on Pearl Harbour. In Russia, strict regimentations, harsh discipline, and long working hours were introduced. Every scrap of raw material and resources went into arms production and nothing else. Adults in the USSR received no food unless they worked in some way for the war effort. Soviet citizens survived on one-fifth of the wartime ration in Britain. In the years of 1942-1944, 2300 new factories were built. Some workers in the country had to move from one part of the country to another to be able to work in an industry. Every single thing in the country was being used. For transport there were mostly trains ("war by timetable") and also new technology was used to get food faster to the front. For example in Leningrad during the years of blockade, the food was delivered in the cars through the frozen lake, there was no other way, as the citizens were cut off from the whole world by the German troops, whose main aim was to starve people out of the city. ...read more.

This didn't take place just in one country; everyone who was involved in the war used propaganda etc. to help the people to deal with such horrible event and to keep their hopes up. And the last thing that I am going to talk about is the number of casualties, which just once again proves us that the Second World War was a Total War. This event saw casualties on an unprecedented scale. For example in World War One it is estimated that a total of 8,500,000 people were killed and 57,470,000 injured. This is already an enormous loss, however the casualties of World War Two were much more horrific! Altogether 55 million died, and more civilians than soldiers lost their lives for the first time, people died from starvation, atrocities and bombing. About 27 million deaths were of the Soviet people; they lost the most than any other country. There were also lots of refugees. Some cities and villages were totally destroyed, especially in Russia. To conclude, from all the examples and factors that are discussed above, I agree that the Second World War was the Total War. Each level of society and every country were affected. Never before was there a war that happened on such enormous scale and caused so much damage. The memories and the pain of this war will always stay in people's hearts. ?? ?? ?? ?? 1 ...read more.