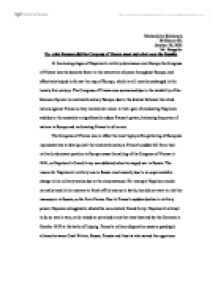 For what Reasons did the Congress of Vienna meet and what were the Results.

Michaeljohn Kalakoutis IB History HL October 30, 2005 Mr. Hengstler For what Reasons did the Congress of Vienna meet and what were the Results. At the closing stages of Napoleon's military dominance over Europe the Congress of Vienna was the decisive factor in the restoration of peace throughout Europe, and effectively helped to format the map of Europe, which is still mostly unchanged in the twenty first century. The Congress of Vienna was summoned due to the instability of the balance of power in nineteenth century Europe, due to the distrust between the allied nations against France as they moved ever closer to their goal of eradicating Napoleon and due to the necessity to significantly reduce France's power, balancing the power of nations in Europe and reallocating France's old terrain. ...read more.

Napoleon's attempt to do so was in vain, as he raised an untrained army that was thwarted by the Germans in October 1813 at the battle of Leipzig. France's military disposition cause a quadruple alliance between Great Britain, Russia, Prussia and Austria who seized the opportune moment to wage war on France. However, once Napoleon was defeated, the only way for all nations to unanimously agree on what was to become of France and her terrain that was now up for grabs was to summon a meeting of all the European powers, which was the Congress of Vienna, summoned in 1814. The Congress of Vienna had several long term effects on Europe which still stand today, such as the re-establishment of a balance of power in Europe. ...read more.

However, Napoleon's attempts eventually led to a series of alliances against Napoleon ensuring the follow through of the Congress of Vienna's final act which was a series of agreements between European states ensuring that no one state was too powerful, bringing peace to Europe for the time being. The Congress of Vienna was ultimately caused by a marring of Napoleon's image of military invincibility after his costly defeat at the hands of the Russian army which left him significantly weakened. France was attacked due to Napoleon's new found weakness and the Congress of Vienna was formed to deal with the political issues that presented themselves due to the necessity to rebalance the power held by any one state in Europe. ...read more.