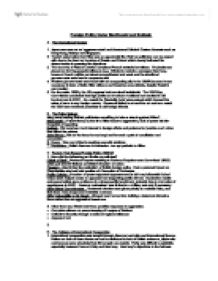 Foreign Policy Under MacDonald and Baldwin A - The International Context 1. Japan was seen as an 'aggressor state' and threatened Britain's Eastern interests such as Hong Kong, Malaya and Singapore. 2. Taylor's assumption that Hitler was an opportunist like Weimar politicians can be argued with due to the German invasion of Russia and Poland which clearly indicated his determination in pursuing his objectives 3. The recovery of Alsace Lorraine completed French territorial ambitions. Emphasis was placed on forming powerful alliances (e.g. -Britain) to restrain a resurgent Germany, however French politics remained uncoordinated and weak and the shortlived governments were hard to cooperate with. 4. Western governments were faced with an unappealing ally in the USSR because it was necessary it deter a Stalin-Hitler alliance and therefore unavoidable, despite Russia's communism. 5. For the entire 1920's, the US congress had remained isolationist. The 1935 Nye Commission concluded that high profits on American munitions had resulted in US involvement in WW1. As a result the 'Neutrality Acts' were passed which banned the sales of arms to any foreign country. ...read more.

D - The Collapse of International Cooperation 1. International cooperation was sought through disarmament talks and international finance. Failure on both of these fronts can not be attributed to lack of British endeavor, diplomatic conferences were scheduled but did not gain any results. Parity was difficult to establish, especially between France & Italy and Germany. Germany's objections to the fairness and ratios of arms were the main cause of failure for the disarmament program. The same day fair British proposals were made, Germany withdrew from talks and later left the League. Their resistance to any plan rendered the Disarmament Conferences useless. After the 1931 collapse of the Gold Standard resulting in serious currency fluctuations, a main objective was to create a stable, worldwide financial system. In June 1933, 64 countries attended the 'World Economic Conference', however differing degrees of loyalty and dependence on the Gold Standard resulted in a clash of interest and cooperation ceased. 2. Fascist takeovers such as the invasions of Abyssinia and Manchuria, weakened the League considerably, and British policies did not help restrain this. ...read more.

The 1937 Inskip Report constrained the economy until 1939, making no preparation for any expeditionary force F - The Invasion of the Rhineland 1. Eden's view was that Hitler's reoccupation of the Rhineland had removed another 'bargaining counter' in the concessions made towards Germany. 2. The British government did not see the reoccupation as a great breach of the Treaty, instead accounting for it as Hitler merely 'marching into his own back yard'. Avoiding antagonism was necessary for Britain, whose armaments and public were not in a fit state to go to war. 3. As a result, France were more vulnerable with the now defended Rhineland no longer acting as a buffer from Germany's troops. G - The Spanish Civil War Britain's ambivalent, non-interventionist policies, chiefly the 'Gentleman's Agreement' which accepted status quo with Mussolini in 1937, helped make forming any future anti-fascist alliance difficult. Russia consequently became increasingly distrustful of France and Britain because of their failure to prevent German and Italian support for the Spanish Nationalists. The League of Nations was revealed as weak and useless - a legitamate Spanish government had been overthrown. The mutual suspicions between Russia, France and Britain made a anti-fascist front even more unlikely. H - Conclusion ...read more.