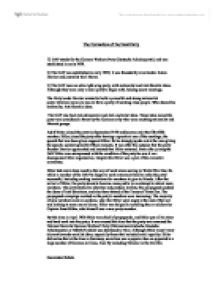 Formarion of the Nazi Party.

The Formation of the Nazi Party 1) DAP stands for the German Workers Party (Deutsche Arbeiterpartei) and was established in early 1919. 2) The DAP was established in early 1919, it was founded by a toolmaker Anton Drexler and journalist Karl Harrer. 3) The DAP were an ultra right wing party, with nationalist and Anti-Semitic ideas. Although they were only a small party to begin with, holding secret meetings. The Party leader Drexler wanted to build a powerful and strong nationalist party. Drexlers main aim was to form a party of working class people. Who shared his nationalist, Anti-Semitic ideas. The DAP also had Anti-democratic and Anti-capitalist ideas. These ideas meant the party was considered a threat by the German army who were crushing nationalist and Marxist groups. Adolf Hitler joined the party in September 1919 and became only the fifty fifth member. Hitler joined the party after hearing a speech at one of the meetings, the speech that was been given angered Hitler. So he strongly spoke out at the man giving the speech, uninterrupted for fifteen minutes. It was after this outpour that the party founder Drexler approached and insisted that Hitler returned. Even after joining the DAP Hitler was unimpressed with the condition of the party he saw it as a disorganised littler organisation, Despite this Hitler was a part of the executive committee. ...read more.

After once again trying to pursue art an failing again, Hitler was homeless and was eating at charity shelters. Here Hitler lived near to the Jewish community. It was in his years in Vienna 1908-1913 that Hitler transformed his thoughts on Jews. Hitler himself describes a single incident as his "greatest transformation of all". He describes a man as "an apparition" suggesting he was a ghostly figure, who was wearing eastern style clothing a "caftan", and had black hair. Hitler continued "scrutinising feature for feature" whilst staring at this mans "foreign face" before concluding with thought "Is this German?" It was from this moment that Jews became more distinguished from the rest of humanity in Hitler's eyes. It was this time in Vienna when Hitler's beliefs on Jews became extreme; these thoughts were fuelled by his own misfortune in Vienna and the success of the Jewish Community that was around him. So then Hitler tried to leave Austria when he was 24 to avoid service in the Austrian army. He was tracked down but still managed do dodge army service, after failing a medical. Hitler's reluctance to serve the Austrian army could be due to the fact that he was obsessed with German Nationalism. Then in August 1914 Hitler was part of a crowd in Munich celebrating the announcement of the war. After this Hitler volunteered for the army, he was part of the Bavarian regiment. ...read more.

Some of the points were all German citizens to have equal rights and duties and the health system to be raised. This appealed to many members of the German Society including; the peasants', tenant farmers, urban workers all who wanted equal opportunities. Finally the programme included some anti-democratic ideas which included; the confiscation of all profit made by war, the division of large department stores to be leased to small traders. This would of appealed to the peasants' and the urban workers as they wanted the chance to be equal with the rest of society. After the party announced The Twenty Five Points, Hitler changed the party's name to National Socialist German Workers' Party (Nationalsozialistische Deutsche Arbeiterpartei or NSDAP) also known as the Nazis. Hitler then incorporated the swastika as the party's official symbol. He eventually became F�hrer of the Nazi Party in July 1921. Hitler became the most important member of the party after first recruiting ex-soldiers by using the party's anti-Semitic and nationalist ideas. Then he realised that to gain even more support the party would have to appeal to the more members of the German Society. So this is he introduced The Twenty Five Point Programme, which was designed to appeal to the largest amount of people possible. By the end of 1920 the party had increased to around three thousand members. this is what Hitler the most important member of the party. ?? ?? ?? ?? Gurminder Sahota ...read more.