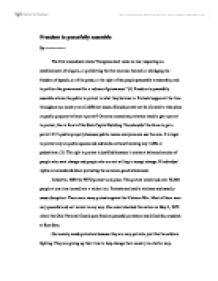 Freedom to peacefully assemble By ========= The first amendment states "Congress shall make no law respecting an establishment of religion, or prohibiting the free exercise thereof; or abridging the freedom of speech, or of the press; or the right of the people peaceably to assemble, and to petition the government for a redress of grievances." (4) Freedom to peacefully assemble allows the public to protest in what they believe in. Protests happen all the time throughout our country on all different issues. Should protest not be allowed to take place on public property without a permit? On some occasions protesters need to get a permit to protest, like in front of the State Capital Building. You shouldn't be force to get a permit if it's public property because public means everyone can use the area. It is legal to protest only on public spaces and sidewalks without blocking any traffic or pedestrians. (1) The right to protest is justified because it creates a balanced society of people who want change and people who are not willing to accept change. If individual rights are considered about protesting the common good is balanced. In Seattle, 1999 the WTO protest took place. ...read more.

The police or the National Guard are feared by protesters and retaliate with violence even if there is no violence by the protesters. The Government wants the people to be feared so we won't protest about how the Government should change and how the war should be stopped. People need to rise above the fear they have for the Government and protest in what they believe in. If enough people come together to protest an issue they can make a difference. Freedom of speech and peaceful assemble is a very important Constitutional Amendment. (Individual Rights over the Common Good) On May 4th, 1970 students went onto the Kent State campus protesting the bombing of Cambodia. Some students started throwing rocks and windows were broken which made the Governor of Ohio James Rhodes send in the National Guard. The Ohio National Guard that went to Kent State on the order of the Governor were ill-trained and came right from riot duty elsewhere; they hadn't had much sleep. The National Guard had lack of military judgment and walked straight down a hill into the crowd of angry students. Then they turned back and were almost out of sight of the protesters when some of the soldiers opened fired on the crowed of students, hitting thirteen and killing four. ...read more.

(5) Mcdonough, and Yona Zeldis. Peaceful Protest : the Life of Nelson Mandela / Yona Zeldis McDonough. New York: Walker & Company, 2002. 5-122. This book was a good secondary source. The author wrote about the life of Nelson Mandela and how he used protesting in a peaceful way. This was an information book but it made the reader support Nelson Mandela and how the Government over re-acted even though the protests were completely peaceful. This will help me in my paper by adding ideas of Nelson Mandela and how he thought of protesting. He never acted in a violent manner and he said that acting in a violent way will get you know where. I will use this source again. This source was a very helpful, useful and understandable. ] (6) Gordon, William A. "Kent State, May 4, 1970: America Kills Its Children." The Ethical Spectacle. May 1995. 16 Mar, 2008 <http://www.spectacle.org/595/kent.html>. This website is a great secondary source. The author described in detail the events at Kent State. He wanted to let people know what happened and why it was a tragic event that took place. I will use the information about what exactly happened at Kent State in my paper. I will use this source again if I ever research this topic. ...read more.