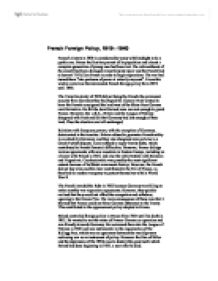 French Foreign Policy, 1919 - 1940 France's victory in 1918 is considered by many with hindsight to be a pyrhic one. France had lost ten percent of its population and almost a complete generation of young men had been lost. The rich northeast of the county had been damaged almost beyond repair and the French had to borrow 175 billion Francs in order to begin reparations. The war had turned them "into partisans of peace at virtually any cost". It was this wish to avoid war that dominated French foreign policy from 1919 until 1940. The Versailles treaty of 1919 did not being the French the permanent security from Germany they had hoped for. General Foch wanted to have the French army guard the land west of the Rhine from German remilitarisation. He felt the demilitarised zone was not enough to guard France. However, the U.S.A., Britain and the League of Nations disagreed with Foch and felt that Germany had lost enough of their land. ...read more.

French politicians did not immediately consider Hitler a threat. In fact, many of the right-wing group endorsed his anti-Communist and anti-Semitic policies. The Four Power Pact was signed between German, Italy, Britain and France in 1933. It showed Hitler as a peace-loving leader and eased the worries of those in France who saw Hitler as a potential dictator and a threat to France. However, when Barthou became Foreign minister in 1934 he held onto his opinion that Hitler was a definite threat to French security. He believed that the French needed to sign an agreement with Russia so that Germany would once again be faced with a two front war if she provoked France. He travelled to Moscow and began negotiations. However, he was assassinated with the Yugoslavian King and the plans were dropped. The dropping of these negotiations proved to be a huge mistake as Stalin then turned to Hitler to make an agreement which would buy him time in the event of a war. ...read more.

When Hitler invaded Czechoslovakia, the French immediately pulled out of the alliance with the Czechs no wanting to be drawn into war. They also dropped the alliance with Poland, realising it was next on Hitler's list. However "its pacifism weakened its cause" and it was only a matter of time before they would be invaded also. They realised that an alliance with Russian was required to tip the balance in favour of the democracies, but it was too late as the Nazi-Soviet pact had already been signed. In a last ditch effort, the French then hoped that the Maginot line, a colossus of concrete and steel built along the border with Germany would protect them. However, Hitler simply marched through Belgium and the Ardennes forest and using his Blitzkrieg tactics had France on its knees in just a few weeks. France, because of its pacifist policy, had no weaponry to fight off the invasion. Their appeasement had undoubtedly been their downfall. Had they stood up to Hitler from the beginning, perhaps they could have changed the course of history. ...read more.