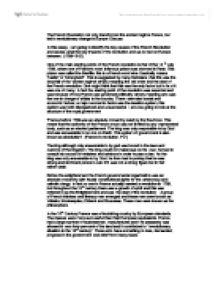 The French Revolution not only transformed the ancient regime France, but led to revolutionary change in Europe. Discuss In this essay, I am going to identify the key causes of the French Revolution and assess what the key impacts of the revolution and wars had on Europe between. (1789-1815). One of the main starting points of the French revolution is that of the 14th July 1789, where one of France's most infamous prison was stormed in Paris. This prison was called the Bastille; this is a French word what basically means "castle" or "stronghold". This is suggested by many historians, that this was the downfall of the 'ancien regime' simply meaning the old order and the start of the French revolution. One might think that this was the only factor but in fact it was one of many. In fact the starting point of the revolution was expected and was because of how France was governed politically; simply meaning who was the one in charge of affairs in the country. There were also social and economic factors; a major economic factor was the taxation system, this system was both disorganized and unsuccessful. ...read more.

But this wasn't only the financial crisis that contributed to the revolution of 1789; the economical crisis also played a major part. The French economy largely based on agriculture and had good harvests between the 1730's and 1770's. The good harvests allowed France to have additional food stores. However during the 1780's this soon came to an end because France was hit by a number of disastrous harvests. These bad harvests happened in 1778-79.There were bad harvests in 1781-82, 1785-86 and 1787. France had not seen the worst yet, their worst harvest was to happen in 1788 during a very wet spring and freak hailstones in many areas of July thus resulting in a bad harvest. The major effect this had on the French was massive unemployment. The bad harvests of 1787 and 1788 did in fact lead to fears of starvation. This caused the peasants to journey in to the towns in order to find food. These men were furious and wound soon form part of the angry crowds of Paris prior to the revolution. In 1789, due to the major economic and social crisis, was the start of the beginning of the revolution. ...read more.

There were also territorial impacts of the revolution. The revolution changed the way in which Europe looked; France had a vast amount of territory during the revolutionary war (1792-1801). This war had major changes on the European continent. In Italy, the city states of Genoa and Venice never recovered and independent existence, Austria lost control of Belgium and the Holy Empire was abolished. The French revolution drastically changed the way countries were governed and aimed to allow every citizen to have equal rights. The system in France and other countries in France where governed by and absolute monarchy, the system in France and a system of government with three class systems with the first two gaining special privileges from tax and gained special benefits from the King. The revolution wasn't going to be a French panic for very long as these ideas were going to spread into neighbouring countries and affect their absolutist monarchies. The enlightenment thinkers really started the revolution although not intentionally, these were a group of French thinkers who emerged but didn't want revolution, they only wanted to spread their ideas although many saw them as ideal these men were known as Voltaire, Montesquieu, Diderot and Rousseau. ...read more.