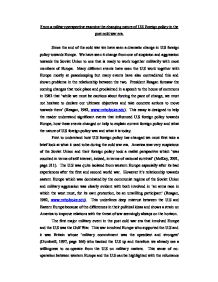 From a military perspective examine the changing nature of U.S Foreign policy in the post cold war era.

From a military perspective examine the changing nature of U.S Foreign policy in the post cold war era. Since the end of the cold war we have seen a dramatic change in U.S foreign policy towards Europe. We have seen it change from one of suspicion and aggression towards the Soviet Union to one that is ready to work together militarily with most members of Europe. Many different events have seen the U.S work together with Europe mostly at peacekeeping but many events have also contradicted this and shown problems in the relationship between the two. President Reagan foresaw the coming changes that took place and proclaimed in a speech to the house of commons in 1982 that 'while we must be cautious about forcing the pace of change, we must not hesitate to declare our ultimate objectives and take concrete actions to move towards them' (Reagan, 1982, www.mtholyoke.edu). This essay is designed to help the reader understand significant events that influenced U.S foreign policy towards Europe, how these events changed or help to explain current foreign policy and what the nature of U.S foreign policy was and what it is today. First to understand how U.S foreign policy has changed we must first take a brief look at what it used to be during the cold war era. America was very suspicious of the Soviet Union and their foreign policy took a realist perspective which 'was couched in terms of self interest, indeed, in terms of national survival' (McKay, 2001, page 311). ...read more.

In one report it was claimed that 'America, France and Britain - the driving force behind the military effort - have displayed an impressive degree of unity' (Economist, 9th Sept 1995, page 37) which supports the claim that since the cold war era relations between the U.S and Europe have been improved, especially with Russia supporting the efforts in Bosnia which could not have been predicted considering the atrocious state of U.S-Soviet relations under a decade ago during the cold war After Bill Clinton decided to get the U.S militarily involved in the Bosnian conflict he began to be more involved in foreign policy towards Europe, with some crowning him as 'a foreign policy president' (Economist, Oct 14th 1995, page 67). This was partly due to his efforts to be re-elected, especially after the loss of power over America's domestic agenda now that the Republican party controlled Congress. His involvement in Bosnia 'he boasts...are bringing results' (Economist, Oct 14th 1995, page 67) and with progress being made in other European areas of military conflict like the diplomatic talks in Northern Ireland and later military action in Kosovo we can see what a significant difference Clinton made to the nature of U.S foreign policy, how he has moved America into closer understanding with Europe and how he has helped shape U.S foreign policy into what it has become in present day. He helped America make the transitional stage from being a lone actor on international affairs, which they had been for some time, to one that is the leader who works closely with her allies. ...read more.

than ever before. However not every European supported America with some believing that 'the attacks on America were a consequence of the evils of American foreign policy' (Economist, Sept 15th 2001, page 21) which shows that U.S foreign policy must also be careful because it has enemies in Europe as well as the middle east. To conclude we must look at the past decade since the end of the cold war and realise that American foreign policy has moved on a great deal. The 'New World Order' in 1991 'recognised that the U.S could not do everything' (Dumbrell, 1997, page 163) and signalled the start of an American Foreign Policy that relied more on multilateral action rather than unilateral. This change has meant that the U.S has had to find closer friends and has therefore brought Europe in as a closer ally than ever before. The different conflicts that America has joined on European soil, fighting with European soldiers in Bosnia and Kosovo has brought the two together through co-operation on military matters. Also 'the September 11th attacks will not be an American return to isolationism, but a reinvigoration of engagement' (Gordon, 2001, www.brook.edu) with relations with Russia never being so good in the post-cold war era. This constantly changing world environment means that the future of U.S foreign policy will never be certain but the days of isolationism and suspicion of Europe are for the moment behind us and with the new war on terrorism in which America will lead 'U.S foreign policy will probably never be the same again' (Gordon, 2001, www.brook.edu). ...read more.