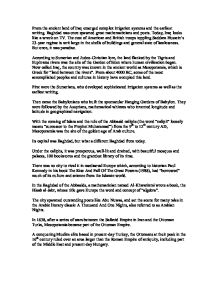 From the ancient land of Iraq emerged complex irrigation systems and the earliest writing. Baghdad was once spawned great mathematicians and poets. Today, Iraq looks like a wreck on TV.

From the ancient land of Iraq emerged complex irrigation systems and the earliest writing. Baghdad was once spawned great mathematicians and poets. Today, Iraq looks like a wreck on TV. The cost of American and British troops toppling Saddam Hussein's 23-year regime is writ large in the shells of buildings and general state of lawlessness. But once, it was paradise. According to Sumerian and Judeo-Christian lore, the land flanked by the Tigris and Euphrates rivers was the site of the Garden of Eden where human civilization began. Now called Iraq, the country was known in the ancient world as Mesopotamia, which is Greek for "land between the rivers". From about 4000 BC, some of the most accomplished peoples and cultures in history have occupied this land. First were the Sumerians, who developed sophisticated irrigation systems as well as the earliest writing. Then came the Babylonians who built the spectacular Hanging Gardens of Babylon. They were followed by the Assyrians, mathematical whizzes who invented longitude and latitude in geographical navigation. With the coming of Islam and the rule of the Abbasid caliphs (the word "caliph" loosely means "successor to the Prophet Muhammad") from the 9th to 12th century AD, Mesopotamia was the site of the golden age of Arab culture. ...read more.

Before the global media turned its spotlight on Iraq, one of the few Westerners to highlight its historical and cultural legacy was the celebrated author of graphic novels, Neil Gaiman. In the comic book Fables And Reflections (1993), he wrote and illustrated a beautiful fantasy contrasting the riches of life during the time of Abbasid king Haroun Al Raschid- the king hailed in A Thousand And One Nights 0 with the rubble of modern Baghdad. Post-colonial critic Edward Said, a Palestinian now living in the US, has noted the ignorance of Arab art and culture within the American establishment. He argues in his book Culture and Imperialism (1993): "American attention works in spurts; great masses of rhetoric and huge resources are lavished somewhere (Vietnam, Libya, Iraq, and Panama), followed by virtual silence." Scattered throughout the world, a small group of Iraqis have attempted to create a more lasting awareness of their culture. In London, a diasporas of Iraqi visual artists has banded together to form Stokes Of Genius, a collective which exhibits and publishes writings on contemporary Iraqi art. Author Nawal Nasrallah, based in America, recently published an Iraqi cookbook after sifting through ancient recipes, including those preserved on Sumerian clay tablets and deciphered by archaeologists. ...read more.

Titled Zabibah and The King, it depicts the love affair of a wise ruler, thought to represent Saddam, and a beautiful woman. A short-hand for the Iraqi people, she is raped by her blackguard husband on Jan 17, the dare in 1991 when the US-led Operation Desert Storm began bombing Baghdad. > The love songs of contemporary Iraqi pop star Kazem Al-Saher, 41 are influenced by Arab classical music. The late Syrian poet Nizar Qabani wrote lyrics for some 30 of his songs, and one of Kazem's hits, La Titnahad, was remixed by the dance fusion DJs of London's Transglobal Underground. > Western pop music is hot in Baghdad. A popular local band under the name Bee-Gees plays covers of Western rock, and there is an English-language radio station, Voice Of Youth. Controlled by Saddam's son Uday, it plays everything from Lynyrd Skynyrd to Britney Spears. > At end-2002, audiences were packing Baghdad's National Theatre every night to laugh at themselves. A play written and directed by Abed Ali Qaed, titled Vagabonds, gently mocked Iraqis for having become a nation of beggars. > Among the ancient Iraqi recipes collected by author Nawal Nasrallah in her new cookbook are sweet and sour salmon in almond prune sauce and mustard and kubbut halab, balls of crunchy rice dough stuffed with ground beef, currants, toasted almonds and spices. Her book, Delights from The Garden Of Eden, can be ordered online at www.1stbooks.com ...read more.