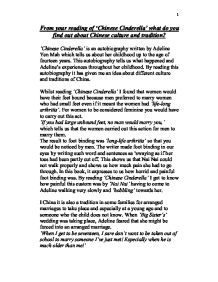 From your reading of 'Chinese Cinderella' what do you find out about Chinese culture and tradition?

From your reading of 'Chinese Cinderella' what do you find out about Chinese culture and tradition? 'Chinese Cinderella' is an autobiography written by Adeline Yen Mah which tells us about her childhood up to the age of fourteen years. This autobiography tells us what happened and Adeline's experiences throughout her childhood. By reading this autobiography it has given me an idea about different culture and traditions of China. Whilst reading 'Chinese Cinderella' I found that women would have their feet bound because men preferred to marry women who had small feet even if it meant the women had 'life-long arthritis'. For women to be considered feminine you would have to carry out this act. 'If you had large unbound feet, no man would marry you,' which tells us that the women carried out this action for men to marry them. The result to foot binding was 'long-life arthritis' so that you would be noticed by men. The writer made foot binding in our eyes by writing such word and sentences as 'swaying as if her toes had been partly cut off. This shows us that Nai Nai could not walk properly and shows us how much pain she had to go through. In this book, it expresses to us how horrid and painful foot binding was. By reading 'Chinese Cinderella' I got to know how painful this custom was by 'Nai Nai' having to come to Adeline walking very slowly and 'hobbling' towards her. ...read more.

In Buddhist families, it is their culture and custom for Buddhist funerals to take place when someone dies. Usually the Buddhist monks are dressed in 'long robes'. Occasionally, when someone dies, the monks would pray for that person. 'All night while listening to the monks praying and watching their shining bald heads in the flickering candle-light'. They also light incense sticks. 'The smell of incense' would often permeate the air. The funeral would tend to take place a day after the death. The coffin is usually 'draped with white sheets and placed on a hearse pulled by four men' and the people who attended this event are usually dressed in 'white robes and white handbags for the boys and white ribbons for the girls'. It is a Chinese tradition to 'absorb the traditional hundred-day religious mourning-period' for the deceased. I found out that the Buddhist monks use to have shaved bald heads. I also found out the type of clothes which are worn on certain occasions such as New Years Day. On New Years Day, the common people would tend to wear 'loose-fitting Chinese long gowns with a traditional mandarin collar and cloth buttons' and the rich would usually tend to dress in 'western-style suits'. In 'Big Sister's' wedding in 'Chinese Cinderella', Big Sister wore a 'Beautiful pink qipao and silver shoes' which is Chinese style clothing. 'The room was filled with masses of fresh flowers, and the Chinese character for double happiness was outlined in red blooms against the wall'. ...read more.

In the Chinese language, 'Ye Ye' is Chinese for grandfather and 'Nai Nai' is Chinese for grandmother. 'Now say goodbye to your Ye Ye'. I found that Adeline's father wanted to send Adeline to a private school and she did where she learnt English but yet at home they still speak Chinese and kept the Chinese culture although they wore western clothes. From my reading of 'Chinese Cinderella' I read that poor people in China use to be so desperate for money that they used to sell their children for a better future. 'The child had a large placard hanging around her neck on which was written 'my name is Feng San-San. I am for sale.''. Adeline was from a rich family and yet she has to dress in clothes which poor people would wear because she was the child of a woman who had died and was now living with her stepmother. Adeline would not receive any new clothes to wear even on special occasions. Her stepmother's children 'were already 'special' from the moment of their birth' and they received many new clothes. Paper was invented in China and the Chinese stories were collected and printed into books. The Chinese were inventive and carried out most of their traditions. Conclusion 'Chinese Cinderella' is not only a book about a deprived daughter called Adeline who was neglected by her father but it also gave me a flavour of Chinese life way of life. This book gave me an inside view of Chinese life during the 1940's. 1 ...read more.