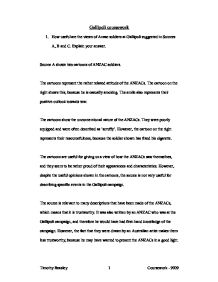 Gallipoli Campaign How useful are the views of Anzac soldiers at Gallipoli suggested in Sources A, B and C. Explain your answer

Gallipoli coursework 1. How useful are the views of Anzac soldiers at Gallipoli suggested in Sources A, B and C. Explain your answer. Source A shows two cartoons of ANZAC soldiers. The cartoons represent the rather relaxed attitude of the ANZACs. The cartoon on the right shows this, because he is casually smoking. The smile also represents their positive outlook towards war. The cartoons show the unconventional nature of the ANZACs. They were poorly equipped and were often described as 'scruffy'. However, the cartoon on the right represents their resourcefulness, because the soldier shown has fixed his cigarette. The cartoons are useful for giving us a view of how the ANZACs saw themselves, and they seem to be rather proud of their appearances and characteristics. ...read more.

The source is useful for describing the enthusiasm and skill of the ANZAC forces. It gives information on when they joined the army and the ability of the soldiers. However, this extract is only part of a book that covers the whole of WWI. Therefore it does not give a detailed insight into the soldiers and the failure of the campaign. The source is trustworthy because it is a factual book. The author was British, so there would have been no reason for him to be one-sided or give exaggerated details. All of the information given agrees with my own knowledge, which means that it is probably correct. However, the fact that the book was published a long time after the war means that the author may have been persuaded by other's opinions and viewpoints. ...read more.

There is no evidence of any particular event, and no mention of dates. This source appears to be someone's opinion, and therefore it is not as useful as fact. The source seems to be rather untrustworthy. Charles Bean was an Australian war correspondent, and therefore he would have wanted to magnify the skill and bravery of the Australian soldiers. This is probably the reason for the exaggerated nature of the source. I believe that source B is the most useful for describing the part played by the ANZAC soldiers at Gallipoli. It is less exaggerated than the other sources, and also less one-sided. The account is more factual, providing more detail about the ANZACs, including a date and a quote from an ANZAC soldier. ?? ?? ?? ?? Timothy Beasley 1 Coursework - 9009 ...read more.