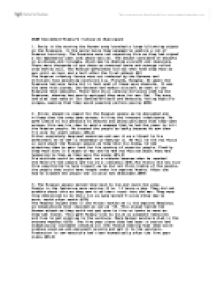 GCSE Coursework-Russia's victory at Stalingrad 1. Early in the morning the German army launched a large blitzkrieg attack on the Russians. In the early hours they managed to capture a lot of Russian territory. The Russians were not expecting this as they had signed a non aggression pact just years earlier. The attack consisted of attacks on airdromes and villages, which was to destroy aircraft and resources. There were thousands of gun shots as armoured tanks and convoys rolled onto Soviet soil. The Russian government did not even know they were at war until an hour and a half after the first attack.(S1) The Russian infantry forces were out numbered by the Germans and divisions from assisting countries e.g. Finland, Hungary. On paper the Russians had more tanks but in fact most of these were obsolete. It was the same with planes, the Germans had modern aircraft as most of the Russians were obsolete. There were still cavalry divisions used by the Russians, showing how poorly equipped they were for war.(3a). The army had also lost many of its leading Officers and Generals, during Stalin's purges, meaning that they would possibly perform poorly.(S3b) ...read more.

Many German soldiers died in the extreme weather.(S10). The five year plans that had been in action had dramatically increased industry all over Russia meaning that they could produce supplies and equipment quickly and get it to the soldiers. Production in raw materials had risen dramatically after the five year plans.(S8,9) 4. The posters are made for propaganda, with the purpose to boost morale. The posters cannot be relied on as reliable evidence as they are Russian. They were drawn by a Russian artist who was paid to draw what the government told him. The lack of detail, and the fact that it doesn't show the reality of war questions it reliability. There is no insight into the German perspective of war just a Russian one, no balance is offered about the two sides. The posters are not factually correct as one is making presumptions, they are biased, one sided, and exaggerating limiting the reliability, On the other hand they are useful as they show an insight into how Stalin's government wanted and tried to boost moral. It also tells us by keeping the moral up that it was one of the factors in the victory at Stalingrad. ...read more.

Major industry was also built up east of the Urals, well out of Hitler's reach.(S8). This would not have been possible though unless there were the five year plans had taken place as it was a good foot hold for industry to grow on.(S8) Weather was another key factor which had halted the German advance as the had to travel, on foot, as vehicle had frozen. Propaganda posters were made of these walking Germans and many other different one, to help keep the people's moral up, which lead to a boost in industrial production as the were cheerful.(S7A,10B,,11). The people then did as much to help the Army as possible and gave them over welling support. The decimated left overs in Staligrad, Gave the Russian army places to hide and fight from. The German tanks could not get through the rubble and the Russians were aided by this as they were trained in 1 on 1 combat (S13D,15).It was here in Stalingrad that the first signs of Russia's superior weaponry showed.(S16) The Germans suffered allot from bad leadership as Hitler was willing to sacrifice every German life so no one would surrender.(S13C,14). Their supply line was stretched that supplies rarely got to the soldiers. (S:Stalingrad video) All these factors lead to the retreat and eventual defeat of the Nazi government. ...read more.