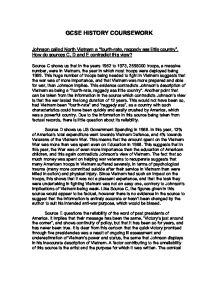 GCSE HISTORY COURSEWORK Johnson called North Vietnam a "fourth-rate, raggedy ass little country". How do sources C, D and E contradict this view? Source C shows us that in the years 1962 to 1973, 2595000 troops, a massive number, were in Vietnam, the year in which most troops were deployed being 1969. This huge number of troops being needed to fight in Vietnam suggests that the war was of more importance, and that Vietnam was more prepared and able for war, than Johnson implies. This evidence contradicts Johnson's description of Vietnam as being a "fourth-rate, raggedy ass little country". Another point that can be taken from the information in the source which contradicts Johnson's view is that the war lasted the long duration of 12 years. ...read more.

This means that the amount spent on the Vietnam War was more than was spent even on Education in 1968. This suggests that in this year, the War was of even more importance than the education of American children, and this again contradicts Johnson's view of Vietnam. The fact that so much money was spent on helping war veterans to recuperate suggests that many American troops in Vietnam suffered severely, in terms of psychological trauma (many more committed suicide after their service in Vietnam than were killed in action) and physical injury. Since Vietnam had such an impact on the troops, this shows that it was not a pleasant experience, and that the task they were undertaking in fighting Vietnam was not an easy one, contrary to Johnson's implications of Vietnam being weak. ...read more.

It is clear from this cartoon that the quick victory promised through five presidencies was a result of ongoing ill assessment and underestimation of Vietnam's power and status, the same that Johnson displays in his inaccurate description of Vietnam. A factor contributing to the unreliability of this source is the artist and the purpose for which it was written. The comical drawings of the presidents indicate that the creator intended the cartoon to be mocking, which implies an opposition to the war. Together, these sources, two of them factual, give a lot of evidence opposing Johnson's claim. The huge financial and military commitments, on top of the many years needed to end the war, seem to blatantly disprove Johnson's statement. Eleanor Crossey Malone ...read more.