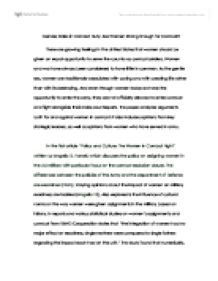 Gender Roles in Combat Duty: Are Women Strong Enough for Combat? There are growing feelings in the United States that women should be given an equal opportunity to serve the country as combat soldiers. Women and war have always been considered to have little in common. As the gentle sex, women are traditionally associated with caring and with creating life rather than with its destroying. And even though women today do have the opportunity to enter the army, they are not officially allowed to enter combat and fight alongside their male counterparts. The paper analyzes arguments both for and against women in combat. It also includes opinions from key strategic leaders, as well as opinions from women who have served in army. In the first article "Policy and Culture: The Women in Combat Fight" written by Angelia D. Farnell, which discusses the policy on assigning women in the U.S military with particular focus on the combat exclusion clause. The differences between the policies of the Army and the department of Defense are examined (DoD). ...read more.

However, it is crucial to note that the above arguments are based on the traditional image of a woman and are general statements rather than ultimate facts; in other words, it may not be true for every woman. While most women lack the necessary physical strength, some may be strong enough to perform in combat situations and they may even be able to meet the male fitness requirements. In the article it mentions that "Women fully understand and accept their military roles; they take the same oath as their male counterparts. That they are women does not preclude volunteering to defend our freedom; women and men both are making the ultimate sacrifice for their country" (Women's Policy Journal 20-21). In the second article "Women and Combat: Why They Serve" written by Holly Zenor, which discusses why women enter the military service. The author tackles several historical events from the American Revolution to the Iraq War wherein women played an important part in the military. She states that some women loved being a man and the excitement of battle. ...read more.

But "I challenged myself to work in army because I wanted to showed the world that if given the opportunity to women could do any task just as good as men." Currently she is on the lay off. She is planning to go back this summer, 2010. As often happens in the heat of battle, circumstances and situations change quickly, and so must America's policies. It is America's moral obligation and duty to do what is right for the women who are putting their lives on the line each day and to honor those women who have already given the ultimate sacrifice of their life for their country. American strategic leaders owe it to these women to review and update the exclusionary policies on women in the military and officially allow women to serve in combat. It would be wrong to keep them from combat situations because of the traditional image they are associated with. Rather, they should be judged on the basis of their abilities and personal characteristics. The bottom line is that it is only fair that all jobs within the services be open to all Soldiers regardless of sex, as long as the individuals are equally competent, qualified and capable of performing the job. ...read more.