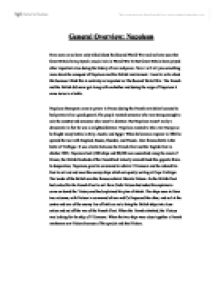 General Overview: Napoleon From now on we have only talked about the Second World War and we have seen that Great-Britain have played a crucial role in World War II. But Great-Britain have played other important roles during the history of war and peace. Now i will tell you something more about the conquest of Napoleon and the British involvement. I want to write about this because i think this is certainly as important as The Second World War. The French and the British did never get along with eachother and during the reign of Napoleon it came twice to a battle. Napoleon Bonaparte came to power in France during the French revolution because he had proven to be a good general.The people wanted someone who was strong enough to rule the country and someone who wasn't a dictator. But Napoleon wasn't really a democratic in fact he was a enlighted dictator. Napoleon wanted to take over Europe so he fought many battles in Italy, Austria and Egypt. ...read more.

When the French attacked, the Victory was looking for the ship of Villeneuve. When the two ships were close together a French marksman saw Nelson because of his epaulet and shot Nelson. Meanwhile the French were trying to board the victory but every man who had managed to board the victory got killed. And because of the sublime tactic of Nelson, the French fleet were forced to surrender or to retreat. Nelson who was dying was still able to hear the good news that they had won the battle. Nelson hes last words were ' I have done my duty , I thank God for it ` and then he died as he happy man. The victory of Nelson was so important and great that they made a monument of Nelson on Trafalgar square in London. But Napoleon wasn't beaten. Ten years later the battle of Trafalgar came the critical battle, the battle of Waterloo on the 18th of June 1815. ...read more.

Wellington's army was situated on a mountain. As marshal Ney attacked, he saw Wellington's army retreating sow he commanded his entire cavalry to attack. But Wellington's army wasn't retreating. They had placed their cannons just behind the top of the mountain. Wellington's army had very great cannons wich are called 'schrapnell'. The cannons fire a cannon ball that splitts up in smaller bullets. When the French cavalry reached the top of the mountain they were surprised by the British cannons and the French cavalry was as good as destroyed. Marshal Ney who saw his cavalry losing, was become mad because of all the horrible things he saw during the campaign in Russia where 300 000 French soldiers died of hunger and cold, could not control his anger and could not think very well. So he sent hes whole army up to the mountain to attack Wellington, wich was a big mistake off course. Marshal Ney who saw hes army losing didn't want to surrender so he kept attacking. Finally the French army was beaten and the war against Napoleon was over. Napoleon was banned to the island 'Saint Helena' where he stayed the rest of his life. ...read more.