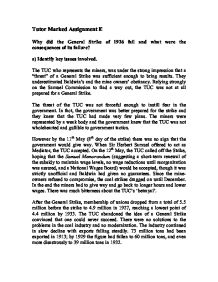 Tutor Marked Assignment E Why did the General Strike of 1926 fail and what were the consequences of its failure? a) Identify key issues involved. The TUC who represents the miners, was under the strong impression that a "threat" of a General Strike was sufficient enough to bring results. They underestimated Baldwin's and the mine owners' obstinacy. Relying strongly on the Samuel Commission to find a way out, the TUC was not at all prepared for a General Strike. The threat of the TUC was not forceful enough to instill fear in the government. In fact, the government was better prepared for the strike and they knew that the TUC had made very few plans. The miners were represented by a weak body and the government knew that the TUC was not wholehearted and gullible to government tactics. However by the 11th May (8th day of the strike) there was no sign that the government would give way. When Sir Herbert Samuel offered to act as Mediator, the TUC accepted. On the 12th May, the TUC called off the Strike, hoping that the Samuel Memorandum (suggesting a short-term renewal of the subsidy to maintain wage levels, no wage reductions until reorganization was assured, and a National Wages Board) would be accepted, though it was strictly unofficial and Baldwin had given no guarantees. Since the mine-owners refused to compromise, the coal strikes dragged on until December. ...read more.

The TUC completely unprepared for a general strike was anxious to end it before provocative government actions caused events to take a more violent turn. As we can see, the TUC feared the government more instead of the opposite. The TUC was also doubtful about their legal positions- Sir John Simon, a Liberal MP who was also a lawyer, said in the House of Commons that the strike was an "Illegal proceeding" , not an industrial dispute, and that the leaders were liable to be sued for damages-"to the utmost farthing" of their possessions- and then sent to jail. The Labour party's attitude was unhelpful- MacDonald was against sympathetic strikes and was afraid that they would simply lose the party votes. The strike was proving too expensive- the TUC had already used �4 million out of their total strike fund of �12.5 million. Government propaganda reflected badly on the miners and the General strike through the British Gazette (the government emergency newspaper) which printed uncompromising articles and fighting exhortations to the police and special constables, despite the TUC giving strict orders that all violence was to be avoided. It was Churchill's idea to use armoured cars to protect food convoys "we are at war" he declared; "we must go through with it; either we crush the strike or the strike will crush us" in fact the special constables had been protecting the food convoys perfectly well. ...read more.

Bitterness at the Trade Disputes Act and unemployment standing at over a million helped to bring the trade unionists and the Labour party together again. There was a big surge in support for Labour which must have been partly responsible for the Labour victory. Labour programme played down full socialism and concentrated on immediate reform. The Conservative Party's attitude towards the miners probably alienated much of their normal support among working men, the Trade Disputes Act did backfire on the government giving the trade unions and the Labour Party a common cause. Although the General Strike failed, it was not without some beneficial effects for the workers. It acted as a warning to other employers who, on the whole, were more reasonable than the mine-owners and avoided drastic wage reductions. Some employers made genuine efforts to improve labour relations; for example, Sir Alfred Mond, founder of Imperial Chemical Industries (ICI), began a series of talks with Ernest Bevin of the Transport and General Workers' Union and with other leading Trade Unionists. In my judgement, the issues of the General Strike run deeper than these key events such as the Unions and the Trade Disputes Act. These are just one of the many consequences of the government's indolent attitude and their ignorance in structuring a strong economic plan. The government refused to make changes that would compromise their very own financial comfort. The problems and the comforts of the lower classes matter not to the government because they had no status in society, and they were wrongly ignored. ...read more.