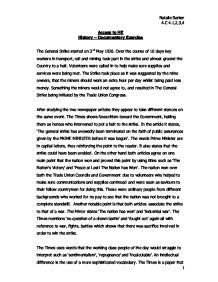 Natalie Barker A.C 4.1,2,3,4 Access to HE History - Documentary Exercise The General Strike started on 3rd May 1926. Over the course of 10 days key workers in transport, rail and mining took part in the strike and almost ground the Country to a halt. Volunteers were called in to help make sure supplies and services were being met. The Strike took place as it was suggested by the mine owners, that the miners should work an extra hour per day whilst being paid less money. Something the miners would not agree to, and resulted in The General Strike being initiated by the Trade Union Congress. After studying the two newspaper articles they appear to take different stances on the same event. The Times shows favouritism toward the Government, hailing them as heroes who intervened to put a halt to the strike. In the article it states, 'The general strike has avowedly been terminated on the faith of public assurances given by the PRIME MINISTER before it was begun'. The words Prime Minister are in capital letters, thus reinforcing the point to the reader. ...read more.

The Times is a paper that is typically associated with upper class, educated people, and it uses long, complicated words in comparison to The Mirrors article. The Times with its underlying view, points to the Government as the innocent party in the strike, there is strong suggestions in the article that the strike was stopped primarily due to the interventions of Government Officials. The Times also mentions the report memorandum Sir Samuel Herbert produced at the time, which within it helped call a halt to the strike. Again it has mentioned a key figure within the strike compared to The Mirror who does not name or mention any key figures within their article. However compare this to The Mirror article where words such as 'rashly', 'wantonly' and 'diminished' are used and more easily understood by the reader. Whilst the difference in the length of the articles show The Mirror, a typically working class paper, prints a shorter article therefore making it more to the point and appropriate to the level of education of the readers. ...read more.

In modern day newspaper articles it is common place to obtain a quote from someone affected by the events or an expert on the subject the article is written about. Both are just the viewpoint of the Journalist who wrote it however, they will have been required to research the events prior The General Strike. This in itself can be construed as a biased opinion and very much dependent on the political stance of the paper. Also a notable missing element from both articles is that pictures or photographs of either people or events of that time. This is something that will give the reader a visual that breaks up the article. For a more in depth and informed view of The General Strike, a credible book would need to be read that gives specific details of The General Strike as a whole. To get a better picture and more in depth knowledge of the strike other sources would be required. The articles do not go into much detail about the background of the strike and the events leading up to it. If one was to read the two articles alone with no other information on the General Strike adequate deductions could not be formed. Word Count 950 ?? ?? ?? ?? 1 ...read more.