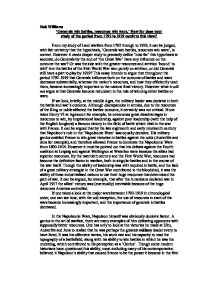 'Generals win battles, resources win wars.' How far does your study of the period from 1792 to 1919 confirm this view?

Rob Williams 'Generals win battles, resources win wars.' How far does your study of the period from 1792 to 1919 confirm this view? From my study of Land warfare from 1792 through to 1919, it can be judged, with fair certainty that the hypothesis, 'Generals win battles, resources win wars', is correct. However it needs deeper study to precisely define 'how far' this hypothesis is accurate; do Generals by the end of 'the Great War' have any influence on the outcome the war? Or was the side with the greater resources and attrition 'bound' to win? Are the battles of the First World War won purely on attrition, or did Generals still have a part to play by 1919? This essay intends to argue that throughout the period 1792-1919 that Generals influence both on the outcome of battles and wars decreases substantially, whereas the nation's resources, and how they efficiently used them, became increasingly important to the nations final victory. However what it will not argue is that Generals become redundant in the role of winning either battles or wars. If we look, briefly, at the middle Ages, the military leader was decisive in both the battle and war's outcome. Although discrepancies in armies, due to the resources of the King or noble affected the battles outcome, it certainly was not critical. If one takes Henry VI at Agincourt for example, he overcomes great disadvantages in resources to win, by inspirational leadership, against poor leadership (with the help of the English longbow) ...read more.

They met next at the battle of Solferino, which is a battle that indicates how far, at least human resources, had come in the four decades since Napoleons demise. Both France and Austria had over 120,000 men each, making the battle the largest since Leipzig and over twice the size of Waterloo. However, as a result of the length of the battle (14 hours), and the improved material of warfare (e.g. rifled guns), casualty rates were far higher than Napoleonic warfare. Some 40,000 men on both sides were killed or injured, thus showing the destructive effect of improved weaponry and the increasing importance to have more or more effective resources. A similar conclusion, on a broad scale, can be reached after analysis of the American Civil War. It was though, on the surface, the complete antithesis of the Franco-Prussian war; A Civil war-fought half the world apart, a four-year war that concentrated more on attrition (not to the extent of WWI) than Napoleonic decisive battles, but one were skilful Generals proved that they could still influence the outcome of battles. However the conclusion must be that in the end the superior resources of the North were finally victorious. Browning writes about the American Civil War, "The fundamental social and economic differences between the North and the South lead some to conclude that the victory of the North was inevitable. While it might be true that the North was bound to win eventually, it was not inevitable that it would win in 1865." ...read more.

For almost 40 years there were no major wars between the European powers, however during this time industrialisation took a grip, and many of the countries were spending more and more on military resources due to the ensuing arms race. As Helmut von Moltke prophesised as early as 1890 the next war will be "a people's war...and if this war breaks out then its duration and its end will be unforeseeable." The First World War was unlike any that had previously, were not only armies where mobilised for warfare, but whole countries economies geared towards warfare. It was a war where casualty rates where (and still are) incomprehensible, and were civilians for the first line became the front line. It was 'Total War'. Total war relied on a huge output of resources, both in terms of men and in terms of armaments. The historical arguments about the First World War are endless, but two main theories are firmly set in popular belief; firstly that it was a war of attrition, and secondly that the adage "lions led by donkeys" is true. Although much debated, and much exaggerated, both of these popular beliefs are, in the main, true. From 1915-1917 a form of static warfare took place on both the Western and Eastern fronts, with either side entrenched deep in defensive positions. This static warfare presumed that one side would finally break, because a lack of resources, while the other side was the victor. Eventually this was the outcome, Germany being defeated ultimately because when the Americans joined the war on the side of the allies, it gave them a huge access to new resources that German could not compete with. ...read more.